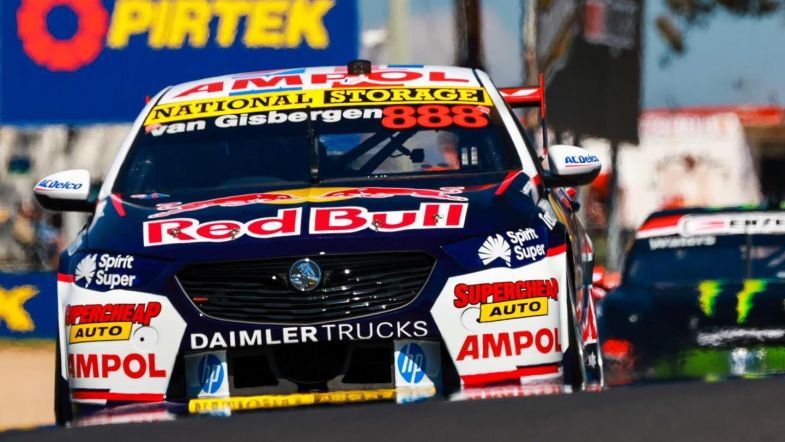 The #888 Holden in the hands of Garth Tander held top stop in the Bathurst 1000 as the race hit the three hour mark, but was set to lose the lead to a recovering Walkinshaw Andretti United.

After tyre trouble for Chaz Mostert had cost him the lead in the #25 Holden, it was Waters who led the way into hour three of the race but he would soon cede position to champion Shane van Gisbergen when he brought the #6 Mustang into the pits at the end of lap 56 for a third stop – handing the car back to James Moffat.

Tim Blanchard came in from third a lap later to hand back to Tim Slade in the #3 Mustang but the Triple Eight cars were able to continue out front ahead of Nick Percat and a recovering Mostert.

The quickest man on track, Mostert stormed past Percat on the run down Conrod Straight on lap 59 to move back into the top three and he then took second on the following lap when Jamie Whincup brought the #88 in for its second stop and handed control back over to Craig Lowndes.

Van Gisbergen would go to the end of lap 63 before the #888 Holden came in for a third time with a 35 second lead over Mostert, who cycled his way back to the front 14 laps after the tyre issue that had forced him to pit early.

Garth Tander took over from van Gisbergen at the wheel and rejoined in third spot behind Moffat, with David Russell sitting fourth; the #99 having run ahead of the #888 car prior to the third stops.

Mostert’s charge to regain the lost ground meant he found himself more than 25 seconds clear of Moffat at the front, with Tander having come back out little over half a minute away from the lead.

The closer battles would be lower down the top ten, with Anton de Pasquale chasing Russell for fourth spot, and the second DJR car in the hands of Will Davison trying to find a way ahead of Luke Youlden for seventh – but with both Slade and Bryce Fullwood close behind.

Lowndes had slotted back in between those two battles after the third stop for the #88 car and held P6.

Davison would make his way ahead of Youlden into seventh spot, with the #26 then coming under pressure from Slade, who almost made contact at The Chase on lap 68, with Fullwood waiting to take advantage if the pair ahead clashed.

Out front, Mostert’s lead was up to nearly 30 seconds when he came in at the end of lap 69; the team changing brakes on the #25 before Lee Holdsworth rejoined in sixth spot.

Just as he left the pits, the battle for eighth was heading into Murray’s Corner and Slade this time managed to get down the inside of Youlden onto the start/finish straight before making the move stick into turn one – with Fullwood taking advantage of the door being opened to also nip ahead.

Mostert’s stop put Moffat into the lead from Tander and Russell, but the #99 wouldn’t hold the position for long as de Pasquale’s pressure finally told on lap 71; the Mustang getting up the inside heading into Quarry Bend to claim the place with relative ease.

Davison was the next driver to come in for a fourth stop as he pitted from seventh at the end of lap 72 to hand the car back to brother Alex, with Russell coming in from fourth two laps later but staying at the wheel of the #99 Holden. Having dropped away from Slade and Fullwood, Youlden then came in on 75.

At the front, Moffat continued to lead the way but had Tander eating into his advantage with de Pasquale dropping away from the lead pair when he came in on 76 for the fourth stop for the #11 car and handed over to Tony D’Alberto.

Moffat then came in a lap later from the lead to promote Tander and Lowndes back into the top two spots for Triple Eight and Holdsworth reclaiming a podium spot in the #25 – which continued to be the fastest car on track.

Lowndes came in at the end of lap 81 from second spot and rejoined back in seventh spot, leaving Tander out front with a buffer of nearly 24 seconds over Holdsworth and Moffat but with his fourth stop pending.