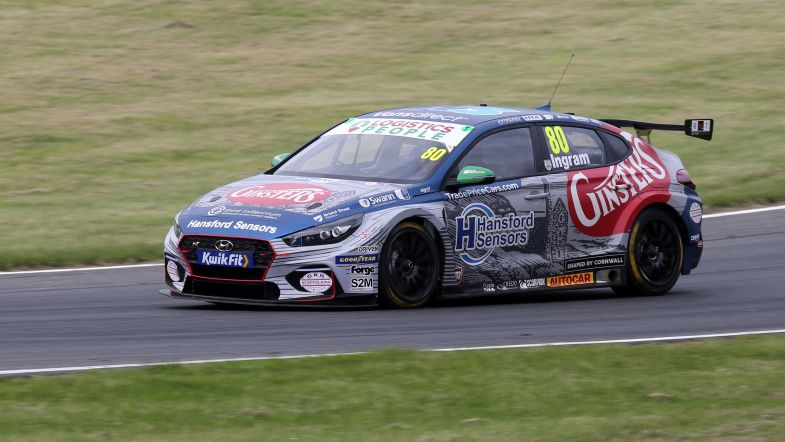 Tom Ingram will remain with the EXCELR8 team for at least the next two seasons after extending his deal with the Hyundai outfit.

Ingram joined the team on what was termed as a ‘multi-year deal’ exactly twelve months ago, and went on to end the 2021 BTCC season fourth in the standings having taken three victories – the first in the series for both the team, and the Hyundai brand.

Set to spearhead EXCELR8’s four-car challenge again this season, the 28-year-old has now committed to the team until at least the end of 2023 and admitted he was delighted to confirm the new agreement.

“I’ve never made any secret of the fact that I want to be in the BTCC for the long haul, and success in this championship relies heavily upon forging relationships with the right people,” he said. “Justina [Williams – EXCELR8 team owner] has a very clear vision of what she wants to achieve, and is willing to invest in the relevant areas in order to do so.

“I arrived at EXCELR8 after spending seven years with the same team, yet I felt fully at home from my first test in the Hyundai. We grew together and worked really hard to further refine the i30 N, so with the benefit of that experience and a year’s engineering development now under our belts, we should be in good shape going into 2022.

“Not just that, but with a number of my main rivals playing musical chairs over the off-season, our continuity can only count in our favour.”

Ingram added that, as the series adopts new hybrid technology for 2022, he was confident that the Hyundai would be a front-runner from the outset when the season kicks off in late April at Donington Park.

“Everybody wants to see the fastest drivers to the fore and competing against each other, because that’s what generates the best racing – but that didn’t always happen under the success ballast system, which made the BTCC a bit of a rear wheel-drive show in recent years, due to the way in which they could manage the excess weight,” he said.

“As the highest-placed and therefore heaviest front wheel-drive car in the points table for the majority of last season, we were invariably on the back foot going into race weekends and that really hampered us – but with no ballast on-board, we unquestionably had one of the quickest cars in the field.

“Given everybody will now be on a level playing field in that respect, I think we will have a strong package from the get-go. Plus, we’ve obviously got plenty of experience of running with the kind of weight that all cars will have to carry in 2022.

“Considering that change and with so many leading drivers switching teams, it really could be the most unpredictable season in ages, but our goal is clear. I’ve been the BTCC’s ‘nearly man’ too many times for my liking, and off the back of such a strong first year at EXCELR8 and with the new challenge of getting to grips with hybrid technology, I’ve never felt so motivated.

“We will 100 per cent come out of the blocks fighting, and the aim is to start as we mean to go on – which means pushing for pole position and victory right from the outset.”