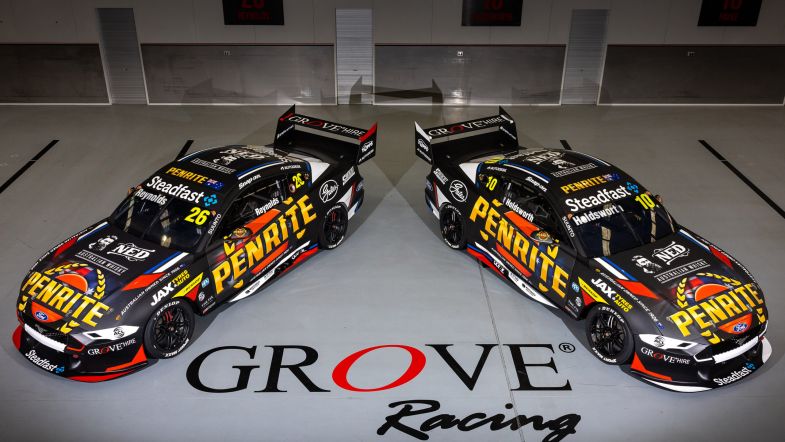 Grove Racing has revealed that both David Reynolds and new signing Lee Holdsworth will run under the Penrite Racing banner for the 2022 Supercars Championship season.

The team’s two Ford Mustangs will run with the same black, red and gold livery during the season ahead, with Reynolds continuing a relationship with the company running back to his time with Erebus Motorsport.

Holdsworth meanwhile rejoins the Supercars grid on a full-time basis having won the Bathurst 1000 last year alongside Chaz Mostert for Walkinshaw Andretti United.

“To have an iconic Australian brand like Penrite to be a part of Grove Racing’s first full year at the helm of our Supercars team is fantastic,” team owner Stephen Grove said.

“Penrite is a well-respected Australian company who Grove Racing have worked with in 2021 and for them now to step up to support both of our cars is a great opportunity for our team to assist in growing the Penrite brand. We are truly excited for the year ahead.

“Like the Grove Group, Penrite is a family-owned Australian company that shares the same business values and there are strong synergies between our two organisations.

“Like all Supercars team, we want to win, and that will always be the aim, but first and foremost, we want to continue to grow, develop our Ford Mustangs and work our way up the grid. This year is about moving forward, improving the business, advancing the team and creating a sustainable and competitive future.”

Whilst Reynolds ran under the Penrite Racing banner for what was then Kelly Grove Racing last season, the sister car of Andre Heimgartner was entered under the NED Racing name