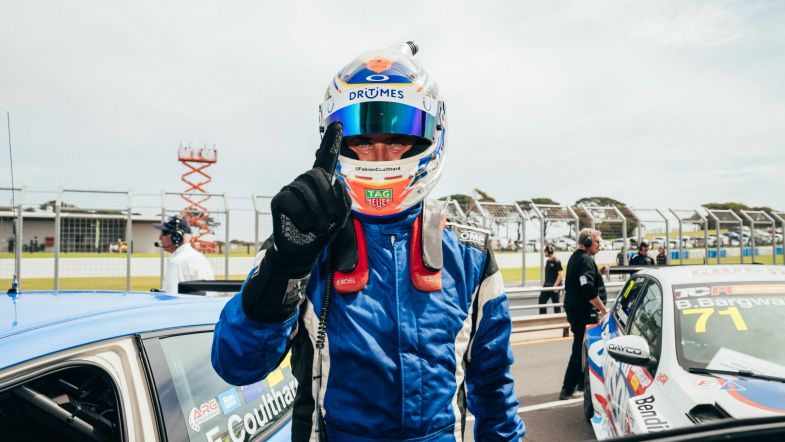 Fabian Coulthard made it two TCR Australia victories out three at Phillip Island after edging out Will Brown in a thrilling final contest.

The Wall Racing Honda Civic Type-R driver started from pole position and led every lap to beat 2019 series champion Brown by just over a tenth of a second at the flag.

Brown made up seven places from his starting position in a sensational drive for the AWC MPC Audi team but just fell short at the finish.

Off the line, it was Race 1 winner Jay Hanson who held the initiative from second on the grid but Coulthard’s secondary start phase enabled the Honda to pull alongside on the run towards Turn 1.

Jordan Cox made it three-wide entering the apex but contact forced both he and Hanson into the run-off and down the order.

There was further contact on the fourth lap down the main straight which punctured Hanson’s right rear tyre and sent him into the gravel at Turn 2.

Coulthard, therefore, maintained his lead from Bargwanna and continued to do so after the safety car was deployed following a scary high-speed crash for Kody Garland’s Renault Mégane at the final corner.

Garland reported contact to the rear of his car early on, which led to his right rear wheel detaching at the flat-out final turn. He spun wildly into the gravel, hitting the barrier but he emerged without injury.

Much like he had done all race, Coulthard led from the restart but had to contend with the charging Brown who had moved up to third after a decisive move on Dylan O’Keefe’s GRM Peugeot 308TCR.

Brown then made swift work of Bargwanna by taking to the grass on the run to Turn 1 before setting his sights on Coulthard in front.

The Erebus Racing Supercars driver soon closed down the deficit to just over half a second and had a serious attempt at passing with three laps remaining; the Audi bumping Coulthard’s Honda at Turn 4.

Brown eventually settled for second, as Coulthard claimed his second victory in a row.

Outside of the top three, Tony D’Alberto finished fourth for Wall Racing, ahead of the recovering Cox.

Michael Caruso was seventh, some distance ahead of Zac Soutar, who in turn fended of the Hyundai i30 N TCR of Bailey Sweeny and Aaron Cameron’s GRM Peugeot.

The next round of the TCR Australia series takes place at Bathurst on the weekend of 15-17 April.