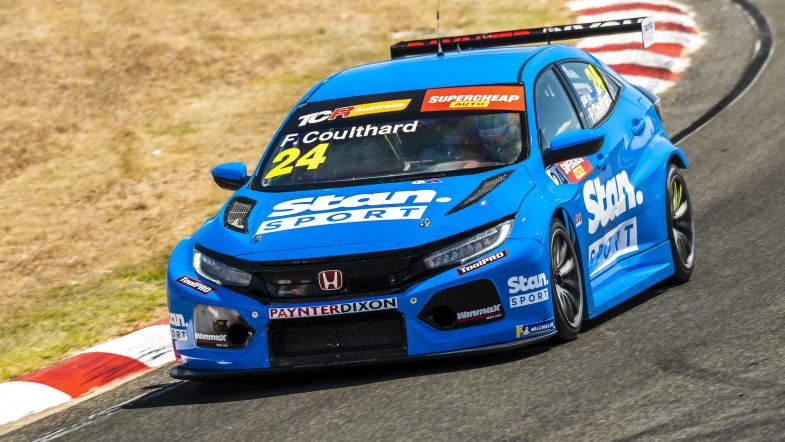 The Honda Civic Type-R driver started seventh on the partially reversed grid but made a stunning getaway to run fourth early on.

Decisive overtakes on Bargwanna and polesitter Michael Clemente gave him the lead which he held for the rest of the race, eventually coming home just over a second clear of Bargwanna.

Clemente got the jump at the start of the race to lead Bargwanna in the opening laps, but soon copped a five-second penalty for being outside of his grid hatchings.

The penalty would soon be irrelevant as Clemente slowed with mechanical trouble as high water temperatures forced him to park his Honda Civic.

Coulthard’s surge to the front relied on a pair of bold overtakes, the first of which on Bargwanna came under braking at the tricky Turn 7 hairpin.

The Kiwi quickly closed down Clemente over the course of the next lap and breezed past the Audi before the final corner after getting significantly better traction out of Turn 10 to grab the lead.

From then on, Coulthard maintained a steady if slight gap over Bargwanna, who was elevated to second following Clemente’s mechanical trouble.

Bargwanna produced a late-race charge to finish just over five-tenths adrift at the finish.

D’Alberto claimed the final step on the podium after dropping two places on the opening lap. His recovery was strong, however, as was his defensive efforts from the GRM Peugeot 308TCR of Jordan Cox in the closing stages.

Indeed, the battle for third place was the most frenetic of the race, as Dylan O’Keefe, Race 1 winner Jay Hanson and 2019 champion Will Brown were all in close company.

The positions remained the same until the finish, with less than two seconds splitting the group.

A number of drivers hit trouble during the race, with Aaron Cameron losing a potential strong result after a turbo hose broke on the third lap of 16.

Points leader coming into the race Zac Soutar was also in the wars, having been hit off track by the HMO Customer Racing Hyundai i30 N TCR of Bailey Sweeny.

Sweeny received a 10s penalty for his actions, but Soutar’s day got worse after running wide onto the grass at Turn 1 and dropping down the order.

Michael Caruso finished eighth in his Alfa Romeo Giulietta, ahead of Nathan Morcom, while Brad Shiels completed the top 10.

With the Race 3 grid determined by the combined points accumulated across the two races and qualifying, Coulthard will line up on pole position ahead of Hanson.

Cox will start third alongside O’Keefe, with D’Alberto and Bargwanna sharing the third row of the grid.

Soutar will look to regather valuable points from seventh, with Will Brown ninth.