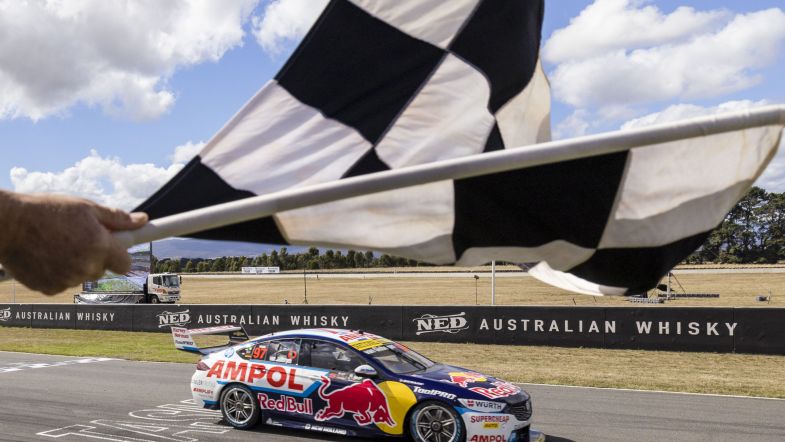 Shane van Gisbergen produced a controlled drive in the final Supercars race of the weekend at Symmons Plains to wrap up a hat-trick of victories from the second meeting of the campaign.

Will Davison had started the race from pole with Jack Le Brocq able to take his place alongside on the front row after his car was repaired following his crash in race two earlier in the day and it was the Tickford man who grabbed the lead on the run to turn one having got away better off the line.

However, things went awry on lap two when Le Brocq locked up going into the hairpin and ran straight on, dropping him down to 23rd spot and promoting Davison into the lead ahead of van Gisbergen and Todd Hazelwood.

Within a lap however, van Gisbergen hit the front, getting down the inside of Davison into turn six, with the DJR man then forced wide by Hazelwood as he tried to follow through. It meant Davison dropped down to fifth spot as team-mate Anton De Pasquale nipped ahead of the pair into second, with Hazelwood retaining third and David Reynolds grabbing fourth.

De Pasquale was soon putting van Gisbergen under pressure for the lead before diving into the pits on lap ten to make his mandatory stop early and try to take advantage of clear air on track. Team-mate Davison would then follow him two laps later as he took looked to use strategy to gain positions.

Hazelwood was the next of the front-runners to come in having moved up into second spot but he was jumped by Davison as he exited the lane – leaving the two DJR cars leading the way amongst those cars to have pitted.

Out front, van Gisbergen was edging away from Reynolds, Cam Waters and team-mate Broc Feeney and pushing hard to try and ensure he had enough time in hand to make his stop and resume in front of De Pasquale and Davison.

The defending champion dived in just after the half-way point of the race and rejoined just ahead of De Pasquale and Davison, with Hazelwood keeping ahead of Reynolds to run fourth and Cam Waters rounding out the top six.

Van Gisbergen was unable to break away from the pack behind as the leading five cars started to close up, with Reynolds showing the strongest pace as he closed in on Hazelwood before a solid move into the hairpin on lap 37 saw him grab fourth.

Heading into the closing stages, van Gisbergen finally started to gap De Pasquale who then dropped behind team-mate Davison with a small error at the hairpin that opened the door to the pole sitter.

Van Gisbergen however had more than enough in hand to tick off the final few laps and take his third win of the weekend to strengthen his lead in the championship standings, with Davison and De Pasquale rounding out the podium places.

Reynolds closed in on the top three but ran out of laps to try and launch a bit for silverware himself as he had to settle for fourth ahead of Hazelwood and Waters, with Mark Winterbottom and Broc Feeney completing the top eight.

A tough weekend for Chaz Mostert ended with 18th place, with Brodie Kostecki also off the pace down in 22nd – just ahead of Le Brocq after his early drama.

Van Gisbergen now leads De Pasquale by 67 points in the standings heading into the next event at Albert Park in support of the Australian Grand Prix.