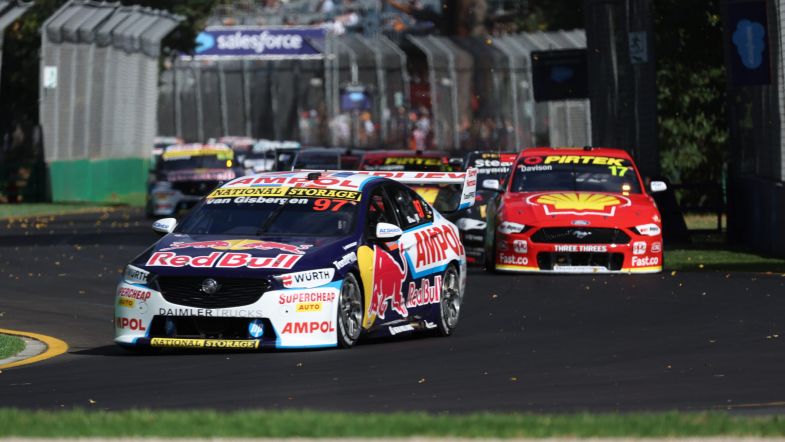 Shane van Gisbergen has extended his lead in the Supercar standings after securing victory in the two Saturday races at Albert Park.

On the back of his recovery drive from the back of the grid to third in race one, the Triple Eight driver grabbed a double win that means he will go into the final race of the weekend having opened up a lead of 186 points over the chasing pack behind.

Race two of the weekend kicked off with Will Davison on pole and the Dick Johnson Racing driver held the lead when the lights went out ahead of van Gisbergen – who managed to get the jump on David Reynolds to move into second place.

Van Gisbergen wasted little time in hitting the front when he moved ahead of Davison on lap two and has established a slender lead when contact between Andre Heimgartner and Will Brown saw the safety car deployed.

“I got fed into the fence, I’m pretty pissed off,” Heimgartner said. “These young guys, they’re driving way too hard and smashing into each other.

“A bit of contact here and there is alright, but plain putting someone into the fence is ridiculous.”

Van Gisbergen was amongst the drivers who pitted under caution to switch tyres and despite another caution being called when Davison was forced off into the gravel by Cam Waters, the Kiwi was able to control the race from the front for the victory.

“I had to put the move on Dave, and try and preserve the Softs,” he said. “Lucky I got a Safety Car and just got out in front of Dave.

“From there on, I was just controlling and trying to get the fastest lap.”

Reynolds would follow van Gisbergen home in second spot, with the battle for third between James Courtney and Chaz Mostert coming to a head on the final lap – with Courtney tipped into a spin exiting the last corner that saw him go into the wall.

It meant Lee Holdsworth – who had started down in 15th spot – was able to nip past the pair to grab a podium finish and put both Grove cars in the top three, with Mostert crossing the line in fourth before being given a time penalty that dropped him down the order.

That promoted Scott Pye up into fourth, with Todd Hazlewood and Gary Jacobson completing the top six, with Courtney able to get his car over the line in ninth.

Amongst the other fancied runners, Anton De Pasquale and Broc Feeney lost out by being forced to double stack in the pits and finished down the order, with De Pasquale also given a penalty for contact with Nick Percat as he tried to come back through the field.

De Pasquale would then start the third race of the weekend from pole position and held the lead ahead of team-mate Davison and Reynolds, with van Gisbergen slipping down to fourth spot.

The lead changed hands on lap four however when De Pasquale ran deep into turn one and dropped down to third before the leading runners made their mandatory stops – which ended with Davison ahead of van Gisbergen, Reynolds and De Pasquale.

Van Gisbergen chased Davison down before making his move for the lead and then eased away from the Ford to take his 60th career win.

“Man, my car is a jet,” he said. “I can’t thank everyone at Red Bull Ampol Racing enough, so enjoyable this weekend.

“I was just pushing and pushing… some good racing, this track’s good for racing and passing.”

Davison would hold on to second spot ahead of Reynolds, with de Pasquale dropping away from the podium battle to finish fourth. Mostert and Feeney rounded out the top six.

As well as extending his championship lead, van Gisbergen strengthened his lead in the race for the Larry Perkins Trophy – on offer to the driver who scores the most points over the Albert Park weekened.

The Triple Eight driver sits twelve points clear of Reynolds, with Tim Slade and Mostert still in the mix with 75 points up for grabs in Sunday’s final race.