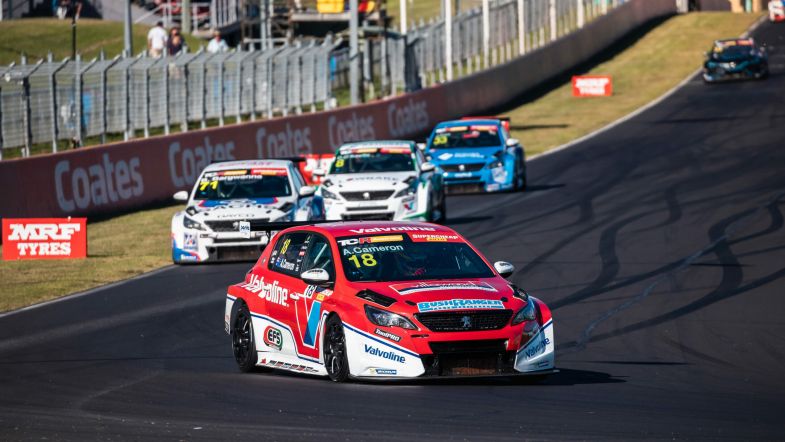 From the front row of the grid, the Peugeot 308TCR driver got a strong start to take the early lead which he never relinquished all race.

Fog delayed the start of the final race of the weekend, but when the 10-lap affair did get started, conditions were ideal throughout.

Starting second on the grid, Race 1 winner Cameron got the best getaway off the line to catapult past polesitter James Moffat to take the lead into Turn 1.

On cold tyres, Cameron was impressive as he opened up a mammoth three-second margin at the end of the first lap, extended to nearly six seconds by the end of lap two of 10.

That was due in part to Moffat’s lack of early pace and heavy defence from third-placed O’Keefe, who had Ben Bargwanna’s Peugeot 308TCR in close company too.

O’Keefe briefly made it past Moffat at the final corner, but the Peugeot 308TCR went a little too deep and was forced to cede the position back to the Renault.

The queue behind Moffat stretched all the way back to Wall Racing’s Tony D’Alberto in ninth position, but there was plenty of action within that gaggle of cars.

Fresh from taking his maiden TCR Australia series victory in Race 2, HMO Customer Racing’s Bailey Sweeny moved up to fourth place with a superb overtaking move on Bargwanna around the outside of the chicane after getting a decent run at the Chase.

Sweeny, with excellent pace throughout the weekend, showcased his promise with a move down the inside of Moffat at the end of the Chase to grab second just after halfway, while Moffat lost more places after a sideways moment at Turn 2 the following lap.

Away from the action, Cameron maintained his lead of over eight seconds from Sweeny, a gap which gradually reduced in the closing two laps of the race as the Hyundai gathered pace.

Off the podium and fourth on the road came Will Brown in the MPC Audi RS 3 LMS, but a five-second time penalty for contact with Josh Buchan earlier in the race dropped the Supercars race winner to seventh in the final result.

That enabled Buchan to inherit fourth ahead of Moffat and Bargwanna, with Royal Purple Racing Hyundai’s Brad Shiels eighth behind Brown.

D’Alberto finished a low-key weekend ninth, while Jordan Cox put in the drive of the day to finish 10th from 21st on the grid.

In the points standings, however, D’Alberto maintains his lead, some 28 points clear of O’Keefe, with Brown a further 11 in arrears.

Cameron is fourth in the points, 54 off the top of the table and one ahead of Bargwanna.

The next round of TCR Australia is scheduled to take place at Sydney Motorsport Park on the final weekend in May.