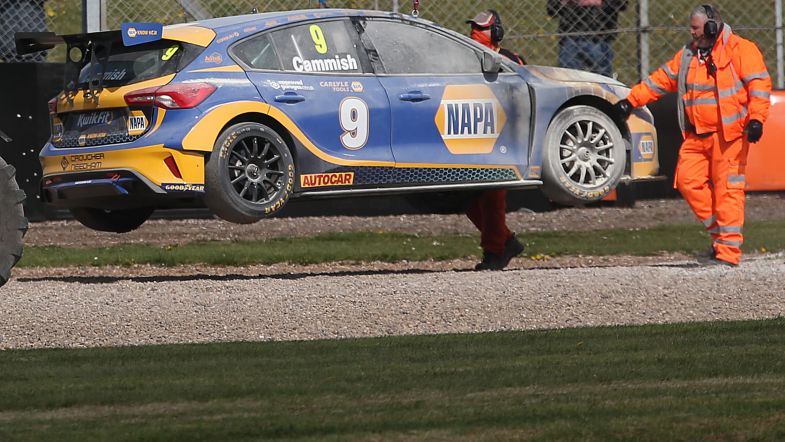 Dan Cammish: “No-one deserves to see a car go up like that”

Dan Cammish admitted that he was gutted for the Motorbase team after his first qualifying session of the campaign quite literally went up in smoke at Donington Park.

Cammish had run towards the sharp end in practice in his Ford Focus and was expected to be in the battle for pole position only for his session to end in dramatic fashion when his car caught fire on the run to McLeans.

The Porsche Carrera Cup title winner was forced to bail out of the car as the fire took hold, with marshals then battling to quell the flames, which appeared to be being fuelled by a potential split fuel line.

With the flames extinguished, Cammish’s car was returned to the paddock where work is now underway to try and repair the damage to get it back out for race day, with a number of team members having headed back to base in Kent to source replacement parts.

“The team has worked so hard to this point and no-one deserves to see a car go up like that,” he said. “I only realised a few moments before it all happened that there was an issue when fuel appeared on the windscreen and then next thing I knew, there were flames.

“I tried to find somewhere safe to pull off but as soon as I slowed, the car was engulfed and smoke was everywhere; I just had to bail out. It was quite a ferocious blaze and the marshals did an amazing job to put it out.”

“We had a fast car and should have been in the top three or four,” he said. “The team has a hard job ahead as pretty much everything forward from the windscreen has gone but I know they’ll do their best.

“If they can get me out then I’ll have a chance to come forwards and try to repay them for their efforts.”