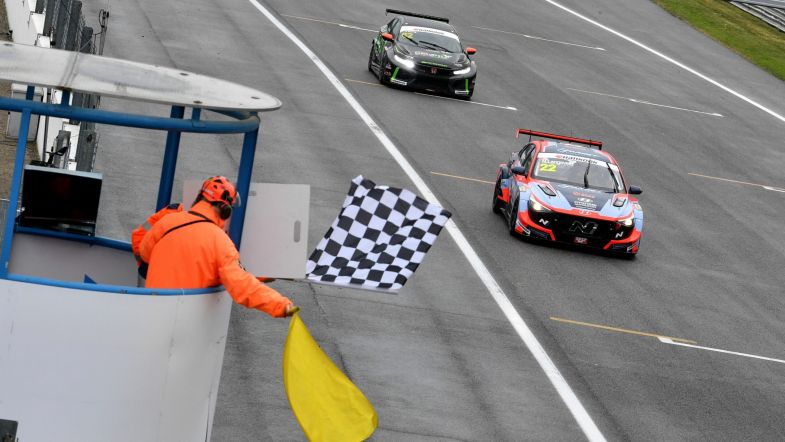 Target Competition driver Niels Langeveld claimed the victory in the opening round of the TCR Italy season at Monza, a race with several incidents due to the changing conditions.

Rain stopped in the moments prior to the race, with the majority of the field choosing slick tyres, but with raindrops starting to fall over Monza during the formation lap.

At the start, pole sitter Denis Babuin stalled, with the field narrowly avoiding the stationary Audi RS 3 LMS without incidents.

Tavano soon closed the gap in the fight for the lead, attacking Langeveld at Turn 1 on lap three. The Hyundai driver kept the lead as the conditions continually worsened.

Young attacked Ceccon, overtaking for third place on lap three as the rain intensified and several drivers had difficulties staying on the track. The pair closed on Tavano, coming three wide into Turn 1 on lap four. Young managed to overtake Tavano for second place, who fell into Ceccon’s grip.

The safety car was called into action on lap four because of an incident involving Felipe Fernández (Cupra Leon Competición) and Matteo Poloni (Audi RS 3 LMS) at Curva Grande.

The race was relaunched on lap seven, with Langeveld staying in the lead and Tavano attacking Young at Turn 1, but unable to get past the Briton. Ceccon continued in fourth place as Trico WRT driver Damiano Reduzzi climbed to fifth position.

Young came side-by-side with Langeveld at the Ascari, with the Dutch defending his lead. Ceccon meanwhile overtook Tavano for third place at Tun 1 on lap eight.

The Briton again attacked Langeveld at Curva Grande on lap nine, with both colliding and Ceccon taking advantage to overtake Young for second place. Langeveld went straight at Turn 1 on the following lap but managed to retain the lead, as Young recovered second place.

Ruben Volt, driving a Honda Civic Type R TCR from ALM Motorsport, was on the move as the conditions worsened, overtaking Reduzzi for fifth position on lap eleven.

Full course yellow was called on the penultimate lap as Edo Cappello (Hyundai i30 N TCR) spun off the track at Curva Grande. The caution was maintained until the end of the race, with the positions remained unaltered.

Langeveld won ahead of Young, with Ceccon completing the podium. Tavano was fourth, followed by Volt and Reduzzi.

“This was extremely difficult, especially as the leading car, with the rain falling and so difficult to find the braking point at Monza,” said Langeveld after the race. “It wasn’t easy, I wasn’t the fastest but we brought it home and I’m very happy.”