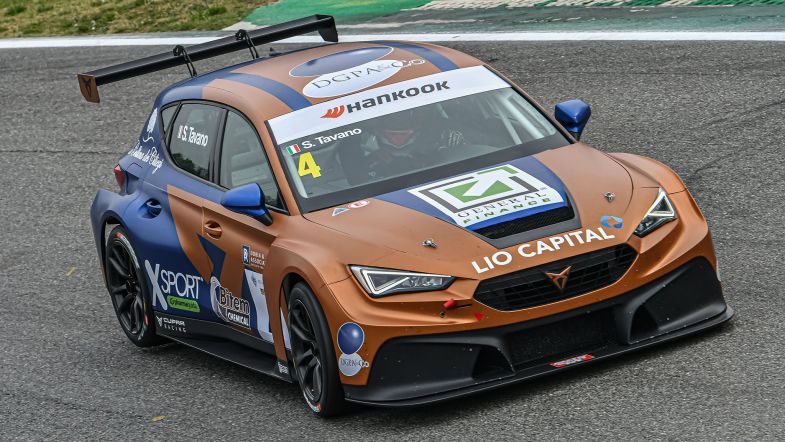 Marco Iannotta, MM Motorsport team-mate to Young, started from the reverse grid pole position, and the majority of the field started on slick tyres due to the drying conditions.

Iannotta was slow off the blocks, with Sylvain Pussier (Cupra Leon Competición) taking the lead ahead of Young and Tavano.

Young didn’t waste any time, taking the lead at Lesmo, as Tavano also mounted the pressure on Pussier, overtaking for second at Turn 1 on lap two.

Right behind, Iannotta had a hard time fending off Niels Langeveld’s (Hyundai Elantra TCR) attacks. Young missed the braking point at Roggia, going straight but managed to maintain the lead.

Young had smoke coming from his left front tyre on lap four due to a piece of bodywork rubbing against the tyre, losing ground to Tavano. The issue disappeared the following lap, with the Briton maintaining his lead.

Saturday’s winner Langeveld retired to the pits at the end of lap five due to a technical issue.

Further behind, Tamburini, in seventh place, developed problems similar to Young’s, coming under fire from Jonathan Giacon (Fiat Tipo TCR), with the duo coming side-by-side at Roggia on lap seven.

Tamburini managed to stay ahead, with Giacon instead coming under attack from ALM Motorsport’s Ruben volt and Antti Rammo, both driving Honda Civic Type R TCRs.

Tavano came right under Young’s rear bumper on lap ten, attacking at Roggia but with the Briton swerving to defend.

Ceccon closed the gap to Pussier with five minutes left on the clock, as Tavano also intensified his attack for the lead. The Scuderia del Girasole driver tried an impossible outside at Turn 1 on lap 14, getting very close to the Honda driver exiting the corner and then overtook Young for the lead at Curva Grande.

Ceccon meanwhile continued putting pressure on Pussier, who went straight at Turn 1 on lap 16. The Frenchman recovered but lost third position to the Hyundai driver at Curva Grande.

The leading positions remained stable for the remainder of the of the race, with Tavano winning ahead of Young and Ceccon, and with Pussier in fourth place.

Denis Babuin (Audi RS 3 LMS) recovered through the pack to cross the finish line in fifth position from eighth on the grid ahead of Iannotta, Volt, and Felipe and Rubén Fernández. Fiat driver Giacon completed the top ten.

“We had practically the same pace as the Honda,” Tavano said after the race. “We had to keep the pace and wait for the right moment. We came together a few times but Young was very correct on the track, I think the battle was on the limit of the racing correction.”

The next round of TCR Italy takes place at Imola on 5-8th of May.