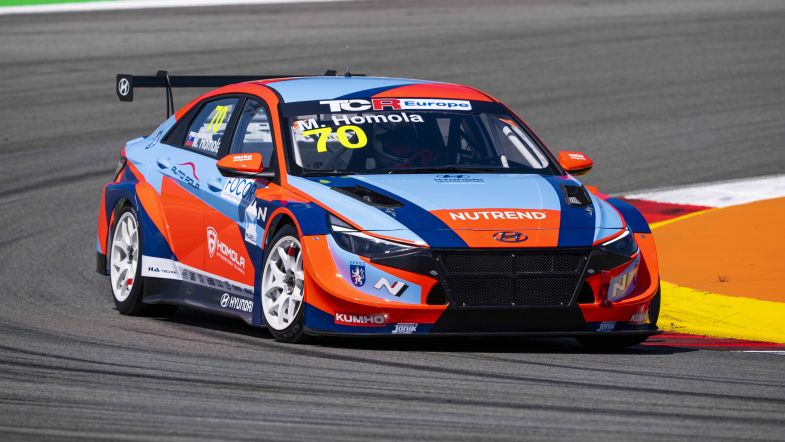 Janík Motorsport’s Mat’o Homola emerged as the quickest driver in the first TCR Europe Series practice session of the year at Portimão.

The Hyundai Elantra N TCR driver posted a time of 1:52.276 to narrowly edge out Halder Motorsport’s new recruit Jack Young by a mere three-hundredths of a second at the end of the 30-minute session.

Returning 2019 Series champion, and the fastest driver in the pre-season test, Josh Files was 10th quickest in his first outing in the Hyundai Elantra TCR.

Indeed, Files was the first to set a representative lap-time early on in the session, setting a 1:52.947, with Target Competition team-mate Nicola Baldan in close company behind.

Homola didn’t take long before hitting the top of the times, and his effort would ultimately prove unbeatable for the duration of practice.

His closest challenger, Young, also set his best time early in the session, with Girolami impressing on his first appearance in the Comtoyou Racing Audi RS 3 LMS TCR in third.

Halder’s sister, and team-mate, Michelle ended up just outside the top 10 in 11th place, albeit less than a second adrift of Homola’s quickest time.

A number of drivers had early lap-times chalked off for track limits violations, including both Halder siblings, Files, Viktor Davidovski, Homola and Tom Coronel.

Dutchman Coronel finished the session seventh fastest, behind the Brutal Fish Racing H0nda of Pepe Oriola and ahead of Volcano Motorsport’s Isidro Callejas

Both Oriola and Callejas took time to set competitive lap-times but when they did, they were not far off Homola’s pace. Oriola, leading the reduced Brutal Fish Racing line-up in the Honda Civic Type-R was fifth quickest, while former team-mate Callejas was eighth.

In between was the best placed Elantra of Felice Jelmini in sixth, just a quarter of a second in arrears of Homola.

Having been near the top of the times early on, Sébastien Loeb Racing’s John Filippi had a difficult session in his Cupra León Competición, finishing 19th out of 20 runners and 2.433s off the pace.