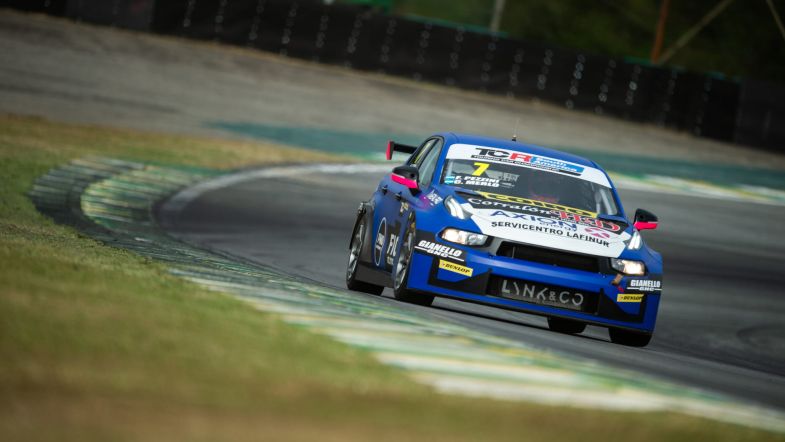 The pair had started on the second row of the grid for the race at Interlagos but would emerge as comfortable winners at the wheel of the #7 Lynk & Co after the early challenge of the Cupra of Raphael Reis and Gustavo Lima came to nothing.

Lima had led the field away at the start with the Honda of Juan Angel Rosso dropping behind the two Lynk & Cos on the run to the turn one, with José Manuel Sapag moving up into second spot and Pezzini slotting into third.

As Reis led the opening lap, the two team-mates behind almost came to blows as they diced for position which almost provided Rosso with the chance to reclaim second.

Once Pezzini got ahead of Sapag, he set about chasing down Lima at the front and soon reeled in the Cupra driver before making his bid for the lead at turn one – sliding down the inside going into turn one.

From that point on, the #7 car would only be headed during the pit stop cycle and once the driver changes were complete, Merlo was left to cruise to the finish and secure a relatively comfortable win.

Lima’s challenge would fall away as his stint passed, with the Hyundai of Pedro Aizza rising up the order to pass Rosso and Sapag before he too started to put pressure on the Cupra.

As the stops cycled through, Reis saw the car he was sharing with Lima drop out of contention for the podium, with Honda of Rosso and Ricardo Risatti instead emerging from the pit window in second, with the Aizza Hyundai – now in the hands of Rodrigo Sperafico – running third.

Sperafico was able to get ahead into second spot but could do nothing about the Lynk & Co ahead, with Risatti bringing the Honda to the flag in third spot to round out the podium for Squadra Martino.

Marcelo Ciarrocchi would bring the second of the Lynk & Cos to the finish in fourth spot, with the Reis having to settle for fifth in the Cupra having spent the closing stages of the race battling on track with the Peugeot of Juan Pablo Bessone – which was well down the order having lost a number of laps in the early stages.

Gabriel Lusquiños and Vitor Genz took sixth in their Honda with the Peugeots of Franco Farina and Gastón Iansa, and Enrique Maglione and Fernando Rama then completing the top eight.

In a race largely devoid of action, Juan Manuel Casello had a spin early on at turn one that saw him almost collect the Hyundai of Edson Reis, whilst Pablo Alves was forced to bring his Honda in to the pits in the closing stages when the bonnet suddenly flew open and was left hanging from the side of the Civic Type R.

The next TCR South America weekend takes place on June 4-5 at Goiânia.