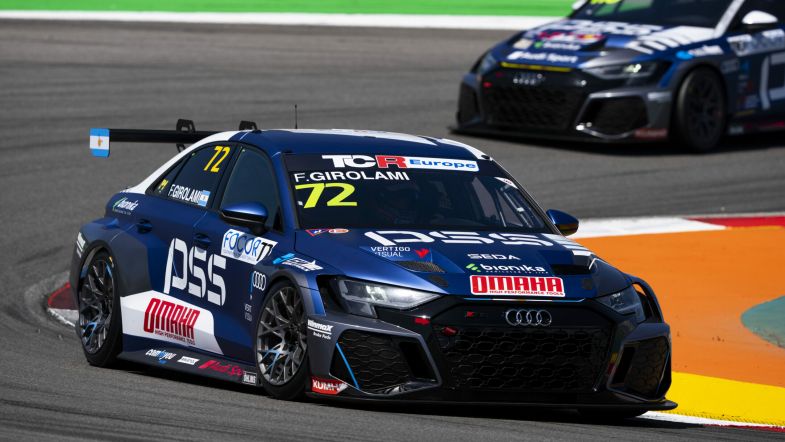 Franco Girolami claimed his first TCR Europe Series victory for Comtoyou Racing in the second race of the weekend at Portimão.

The Argentinean, who finished second in the standings last year to Mikel Azcona, started fourth on the grid but made a superb start to run second early on.

He then got past Oriola on the seventh lap of 15 and duly held on to take the win from the Brutal Fish Racing Honda Civic Type-R by just under two seconds at the flag.

Courtesy of his 10th place qualifying time on Saturday, Oriola started from pole for Race 2 and recovered from a poor initial getaway off the line to maintain his lead into the first corner, despite a firm challenge from fellow front-row starter John Filippi.

Filippi had to back out of an attempted overtake, which allowed Girolami to sneak around the outside of the Cupra León Competiticón at turn two for second place.

Behind, the action was frenetic, with Volcano Motorsport’s Evgenii Leonov tagging the Janík Motorsport Hyundai Elantra N TCR of Mat’o Homola into a half spin at turn four.

Homola made it back to the pits, but was forced to retire with damage.

Oriola continued to lead out front but he was quickly under pressure from Girolami’s Audi RS 3 LMS TCR, particularly down the main straight where the Audi was able to pull alongside on the approach to the first corner.

The 2.17s advantage Oriola originally held over Girolami before an early safety car intervention quickly disappeared and the latter made a decisive move down the inside of turn 5 for the lead on the seventh lap once racing resumed.

Oriola didn’t back down however, and the pair went side-by-side for several corners before the Honda driver had to settle for second.

The fighting for the lead brought Filippi and Comtoyou Racing’s Tom Coronel right together.

Coronel showed strong pace throughout the race and caught Filippi napping on the run to the hairpin to grab third place.

But neither Coronel nor Filippi could mount a challenge for the race win, as Girolami maintained a comfortable margin over Oriola. Coronel fended off the attentions of Filippi and Target Competition’s Josh Files in the latter stages to claim the final step on the podium in third.

The Northern Irishman ran inside the top 10 in the opening salvo but struggled for straight-line speed which put him under huge pressure from the Volcano Motorsport Cupras of Leonov and Callejas.

Eventually, things came to blows at turn one as Young clipped the back of Callejas’s car, dropping both down the order.

Team-mate Mike Halder also had a difficult race, finishing 10th after running off track while fighting with Gavrilov and Jáchym Galaš who finished seventh and eight respectively.

Girolami heads the standings on 68 points, Young is second on 59 and Mike Halder a close third on 58 points.

Next up for TCR Europe is a trip to Le Castellet on the weekend of 21-22nd May.