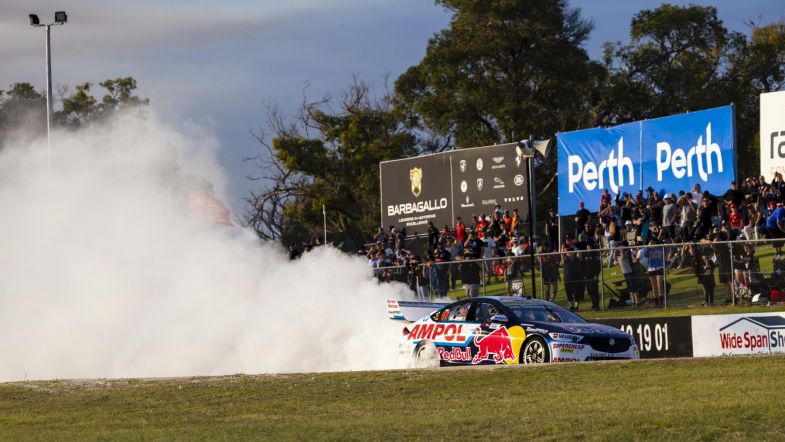 Race two winner Will Davison made the best start to claim the lead from pole sitter van Gisbergen as the lights went to green, with Grove Racing’s David Reynolds following past up into second.

But van Gisbergen fought back and was able to get back past Reynolds before the end of the first lap.

Courtney was able to jump the trio to claim the lead after an early pit stop.

Holden ace van Gisbergen managed to get past Davison for second place at Turn 6 on lap 28.

Courtney then saw van Gisbergen’s Commodore getting closer and closer in his rear view mirror, finally making the pass for the lead stick on lap 40 at Turn 7.

The safety car was issued at the end of the race when Garry Jacobson stopped on track due to a mechanical issue.

The race was resumed with just two laps left.

While the positions at the top remained the same, cousins Brodie and Jake Kostecki made contact on the penultimate lap, leaving a very angry Jake Kostecki stuck in the gravel trap.

Will Brown fought his way past Reynolds to claim fifth position.

Van Gisbergen continues at the top of the standings, heading De Pasquale by 164 points.

The next Supercars Championship race will take place at Winton Motor Raceway on May 21-22.