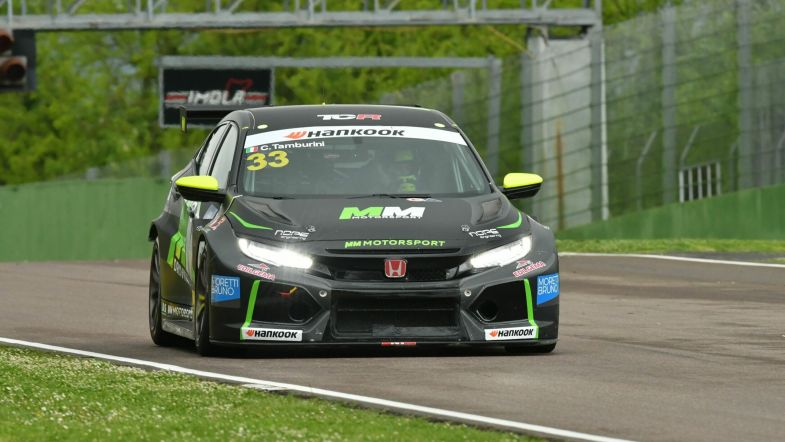 MM Motorsport’s Carlo Tamburini claimed a dramatic victory in the opening TCR Italy race of the weekend at Imola following a last-lap incident between Denis Babuin and Ruben Volt.

Volt and Babuin had been the class of the race in between two safety car inventions, with the pair bumper-to-bumper on the final lap.

Babuin tried to dive down the inside of the ALM Motorsport driver at the entry to Rivazza but tagged the back of the Honda Civic Type-R, pushing Volt into the gravel.

Babuin came home second on the road, but received a 10-second time penalty for the contact, elevating Salvatore Tavano to runner-up and Volt completing the podium in third.

Polesitter Volt got a superb getaway off the start to leap into the early lead as fellow front-row starter Niels Langeveld bogged heavily, losing many places as a result.

Indeed, Langeveld’s Hyundai Elantra N TCR barely moved off the line as the swathes of cars raced past. The Dutchman eventually got going but was 14th by the end of the opening tour.

Out in the lead, Volt built a slender margin of just over half a second from Babuin, with Tamburini third ahead of Jonathan Giacon’s Fiat Tipo.

Giacon’s race soon unravelled in bizarre fashion as a loose wheel from an impact with the Tamburello kerb eventually fell off, briefly pitching the car into the air before coming to a rest in the gravel.

That brought out the first of two safety cars and bunched the pack up.

Volt led the restart but fell under pressure immediately from Babuin, who was glued to the Honda Civic Type-R’s bumper.

The similar Honda of Babuin got close on several occasions, notably on the run towards the Villeneuve chicane and the Piratella corner but could not find a way past.

Behind, Salvatore Tavano’s progress was impressive. Having started 11th on the grid, the past champion worked his way up to seventh by the end of the first lap before moving up to fourth after the first restart.

The second safety car came as a result of another strange incident, this time for Davide Reduzzi, whose Hyundai i30 N TCR went off-track onto the grass exiting Rivazza before slewing across the track and into the barrier.

At the same time, Felipe Fernàndez also went off at the entry to Rivazza with front-left wheel damage.

The final restart came with the 30-minute time limit used up, meaning a solitary lap for Volt to complete.

Volt looked certain to have staved off Babuin’s efforts by the Variante Alta but was tipped into a half spin as Babuin misjudged a late dive into Rivazza.

The Estonian had to go through the gravel before rejoining, but that allowed Tamburini to move past to claim an unlikley victory.

Off the podium, Imberti finished fourth ahead of the Honda of Antti Rammo and Rubén Fernàndez’s Audi.