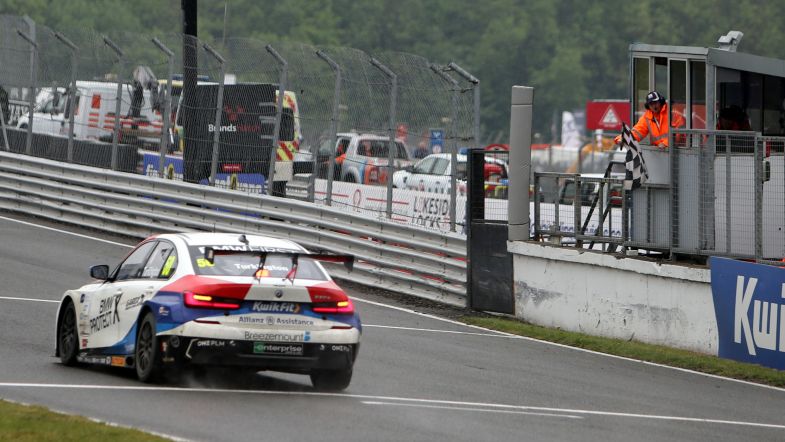 Colin Turkington grabbed his first win of the 2022 BTCC season with victory in the final race of the weekend at Brands Hatch.

Tom Chilton had started from pole in the EXCELR8 Hyundai and held the lead at the start from the fast-starting BMWs of Colin Turkington and Jake Hill, although the latter would slip back to fourth on the run up to Druids behind the Cupra of Bobby Thompson – which had also started from the front row.

After an early caution to recover Jason Plato’s Honda from the gravel at Druids, Chilton held the lead on the restart only for Turkington to sweep ahead at Paddock Hill Bend on lap seventh, with Hill quickly following him through just moments after he had grabbed third from Thompson.

Turkington was able to edge away from Hill at the front before the safety car was called out a second time to recover Chilton’s car – which had dropped off the lead lap after an unscheduled pitstop dropped him out of the podium battle – from the gravel at Clearways.

On the restart, Turkington was able to manage things from the front to take victory ahead of Hill, with Thompson grabbing third spot for his maiden podium finish.

Thompson was forced to push hard to keep Tom Ingram at bay but would ultimately be comfortable in his position as Ingram had to defend to keep Rory Butcher and Ash Sutton behind – both drivers have fought their way forwards through the pack together.