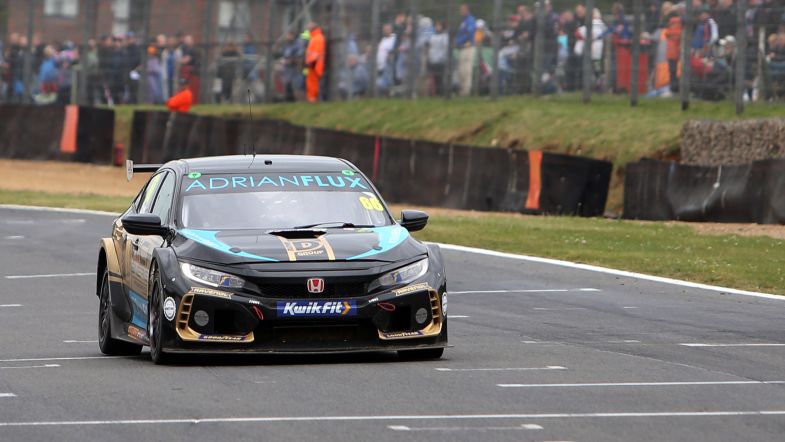 Josh Cook stormed to victory in the opening race of the weekend at Brands Hatch to snare his first win of the BTCC season.

Cook had started the race from fifth spot but the arrival of rain before the start would play a part in how things would pan out on track – with everyone bar Rory Butcher and debutant Will Powell electing to go with wet tyres for the start.

As Butcher plummeted to the back on the opening lap, Colin Turkington held onto the lead ahead of Jake Hill, with Cook jumping ahead of Stephen Jelley and Adam Morgan into third only for Cook to then run wide at Surtees to slip back to fourth.

Cook would managed to get ahead of Jelley on lap seven on the run to Druids and then set about chasing down Turkington and Hill – passing the latter into Paddock Hill on lap 13 and then making a similar move four laps later to take the lead from Turkington.

The BTC Racing driver was able to edge away at the front as Turkington came under pressure from Hill for second, with the ROKiT-backed BMW getting ahead and being followed through by championship leader Tom Ingram in the EXCELR8 Hyundai.

Hill however then ran wide at Paddock Hill Bend to hand second to Ingram, with Dan Cammish also getting ahead into third having battled his way forwards in the NAPA Racing Ford Focus.

The pair would complete the podium with Hill and Turkington behind, and Morgan rounding out the top six.

Butcher took seventh having stormed through the field as the circuit dried on his slick tyres and could have got higher had he not suffered a slide at Clearways on the final lap and run through the gravel.

Gordon Shedden, Ash Sutton and Dan Rowbottom then rounded out the top ten.

Jelley was the big loser as he dropped from third on the grid down to 20th by the finish although all 29 cars were able to make it to the flag.