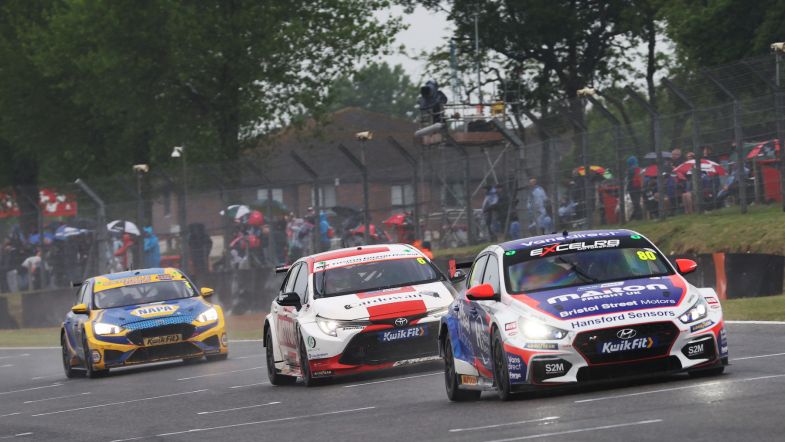 Tom Ingram said he was pleased to retain his advantage at the head of the BTCC standings after picking up a third podium of the season at Brands Hatch.

The EXCELR8 driver had topped the standings going into the weekend and was able to put his Hyundai into the top six in qualifying despite carrying no hybrid into the session.

Wet conditions on Sunday would help Ingram to take to the fight to the BMWs that had led the way on Saturday, with Ingram chasing Josh Cook home to second in race one.

A fifth place finish in race two was then followed up with fourth in the final race to leave Ingram eight points clear of Cook in the standings ahead of round three at Thruxton later in the month.

“It’s nice to still be leading but at the moment, I don’t really care too much about the standings – it’s all about bagging the points,” he said. “We stayed out of trouble and just had to be a bit boring but that’s cool with me if it’s what we have to do.

“It was a bit unexpected to get a podium in race two after qualifying but the track was changing all the time and it certainly wasn’t easy as it’s the first time we’ve driven the cars in those conditions.

“We can come away with our heads held high and look ahead to Thruxton.”