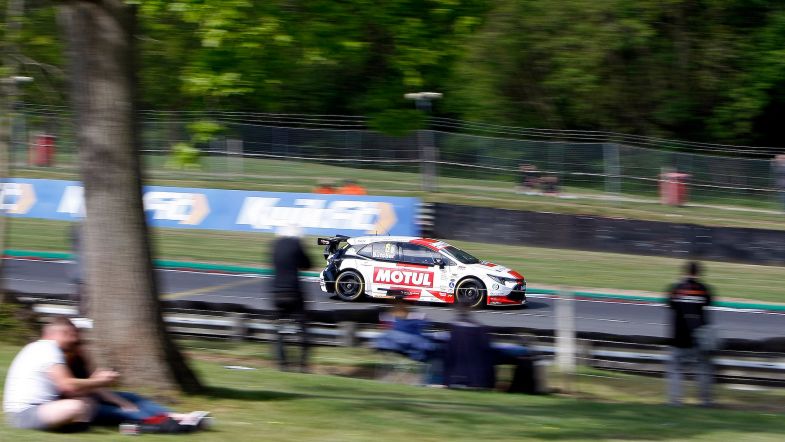 Rory Butcher insists his tyre gamble at Brands Hatch could have resulted in a first victory of the BTCC season, had the race run to one more lap.

Butcher had qualified nine on the grid in his Toyota Corolla and was the only driver towards the front of the grid to gamble with slick tyres in the damp conditions.

Although that meant he dropped to the back of the grid in the early stages the Scot then scythed his way through the park towards the front as the race wore on.

Butcher looked set to grab at least a top five finish before running wide at Clearways on the final slip to seventh, but he felt that – without the mistake and with another lap – the result could have been very different.

“Sitting on the grid ahead of race one, it was so warm and on the weather radar, it didn’t look like it was going to rain again, so we decided to take a punt on slicks,” he said. “The thinking was that towards the end, the track would dry sufficiently for us to take advantage – although when we still weren’t even inside the top 20 at mid-distance, I feared we’d made the wrong call. After that, though, everything began to fall into place and over the last few laps, I really made hay.

““I think with another lap, things could have looked very different and despite my error at the end, we finished ahead of where we had started and made it exciting for everybody watching, so it was definitely progress.”

Butcher would however then secure a podium finish in race two, with fifth in race three allowing him to make up ground in the standings after a tough opener at Donington Park.

“I was really pleased with race two – it was fantastic for the whole team to take our first podium of the year,” he said. “Considering we were practically last after the opening couple of laps in race one, it was great to come through to finish third in that one.

“We were super strong again in race three, and to top the weekend off with fifth place meant we all went home happy. Most encouragingly of all, the Corolla is feeling properly on-point and was quick in all conditions. We had no technical issues on race day, which meant we could think more about detail and strategy and take a few risks, and that clearly paid off.

“Ultimately, we’re here to fight for the championship, so our season starts now!”