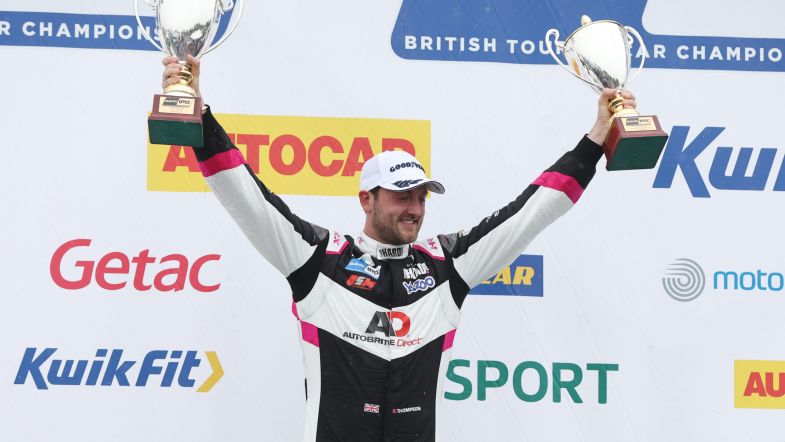 Bobby Thompson admitted it was an ‘incredible feeling’ to secure his maiden podium finish in the BTCC at Brands Hatch.

Thompson had never previously finished higher than sixth but was able to build on a strong start to his campaign at Donington Park, where he picked up thee points finishes on his debut in the Team HARD Cupra Leon.

Although a tough Saturday saw Thompson qualify back in 19th spot, he was able to make forward progress in the opening two races to get up to eleventh place – which gave him a place on the front row for the reverse grid final race.

A battling drive in tricky conditions saw Thompson grab third place behind the BMWs of Colin Turkington and Jake Hill for his first overall podium finish.

It also marked Thompson’s first Independent class victory and allowed him to strengthen his position at the head of the Jack Sears Trophy standings.

“It’s incredible to have got a podium, and to be first front wheel drive car with only the BMWs ahead was amazing as they were in a class of their own on Saturday,” he said. “This was the first time I’d driven in the wet and the Cupra feels great, although there are some traction issues that we need to deal with.

“We came back well from Saturday, where we had a few issues in house and there were some things that were outside our control, and I think the rain did help us to come through the field a bit.

“Without the issues on Saturday, I think we’d have been in a similar place on the grid to where we were at Donington Park, and I think we can go to Thruxton hoping for similar.”