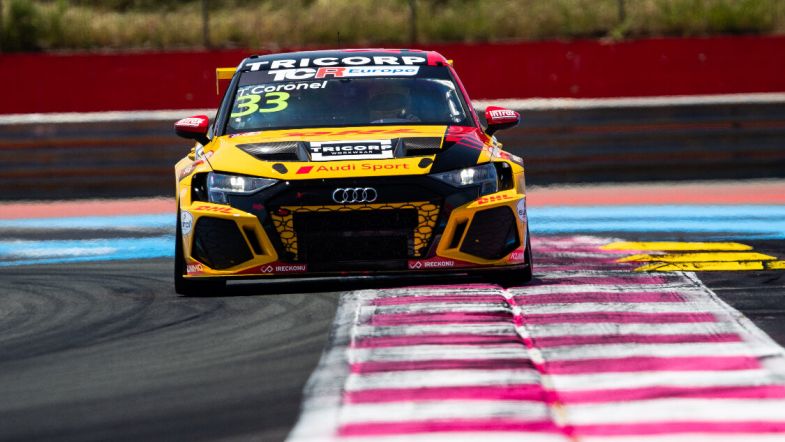 Janik Motorsport’s Maťo Homola was fastest on the first laps in Q1, with the pace quickly improving as Jack Young went over a second faster on his second effort which would prove to be more than enough to get him into the top 12 for Q2.

Most drivers only set two or three laps before pitting, with some then returning to track on used rubber rather than totally fresh sets of tyres and waiting until as late as possible into the session before bringing them up to heat and going for their final two flying laps.

Target Competition’s Felice Jelmini jumped to the top of the times with half a minute to go, and then 10 seconds later his team-mate Josh Files went even faster in the Hyundai Elantra N TCR. His 2:12.368 was good enough to end the session on top and score six points, with Jelmini 0.145 seconds slower in second.

Two successive improvements brought Volcano Motorsport’s Klim Gavrilov up to third place ahead of Halder Motorsport’s Young, who only made an improvement of 0.015s after his first effort.

Briefly up to third place was Coronel, but his fastest lap was deleted for track limits abuse and he ended up in seventh. Similarly, Sébastien Loeb Racing’s John Filippi was set to miss out on Q2 after having his best lap time removed, but was able to improve at the very end up to jump up to eighth in a top 14 spread by less than a second on pace.

Gavrilov’s team-mate Isidro Callejas was 11th in Q1, but straight to the top in Q2 as drivers left it late again before setting flying laps. He was on provisional pole until Coronel set the first sub-2:12 lap of the weekend with two-and-a-half minutes to go, with Jelmini slotting into a second with a lap time that was 0.252s slower.

It seemed that the tyres were at the peak on the first flying lap of the run, as nobody in the top 10 was able to improve on their initial Q2 pace. That meant Coronel claimed pole, his first since the 2021 season opener, ahead of Target duo Jelmini and Files, Filippi and his own team-mate Franco Girolami who extended his championship lead to 10 points. Comtoyou’s third driver Viktor Davidovski will start from pole on the reversed grid for race two after he qualified 10th.

Files is now level with Young for second place in the standings, and Coronel has jumped from eighth to fourth in the points behind Mike Halder, who qualified 14th.

The first race of the weekend is scheduled to take place later on today at 13:40 CEST.