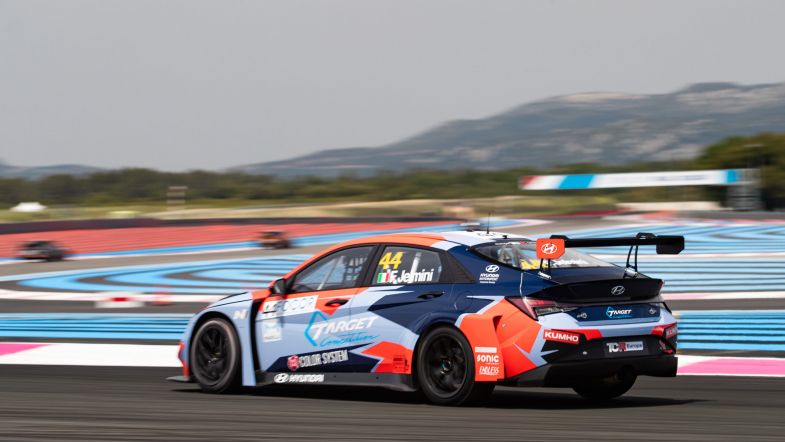 Target Competition’s drivers ended the second TCR Europe round at Paul Ricard with far fewer points than they were expecting, as an already troubled weekend ended with more misfortune.

Electrical problems snagged Josh Files through Race 1, and he was also at the receiving end of a divebomb pass that damaged his Hyundai Elantra N TCR and sent him off the track briefly. He finished eighth ahead of team-mate Nicola Baldan, with Felice Jelmini making the podium in third.

However he joined Baldan at the bottom end of the top 10 in Race 2 on Sunday, while Files finished all the way down in 17th and has now dropped from third to eighth in the championship standings. Target is now third in the teams’ standings, but almost 100 points adrift of Comtoyou Racing.

“My race, it was really difficult,” Jelmini said as he explained his Race 2 result to TouringCarTimes. “I broke the splitter in the first lap so I had no downforce from the front of the car in the beginning. It was so tough because of this, but mainly the biggest problem for us is the lack of power.

“The balance of the car is perfect, but we just need power. Because on the straight it’s impossible to fight with the other cars. We can be faster in the corners, but when we’re back on throttle it’s like we cannot do anything at the moment, to be honest. So the pace of the car is perfect, maybe it should be the fastest car in terms of chassis on the grid, but we have really a lack of power so we cannot fight.

He added: “We hope for a Balance of Performance change, but we do what we can.”

Files ran in sixth early on in Race 2, but when his car started smoking at the front-left wheel arch he had to take to the pits and had lost over a minute when he returned to the track in last place. He revealed to Touring Car Times the cause of the issue.

“Some trim fell off or something and it was rubbing on the tyre so we couldn’t turn right anymore. The genius that is Richard [a member of the Target team] stripped it out, and off we trotted.”

The stripping job involved taking the whole wheel arch off “because it was pulling the brake duct into the wheel, so it wouldn’t turn”. Once Files returned to track, he was still hoping to score points as he said the plan was to “just drive around and hope for a safety car and it didn’t come”.