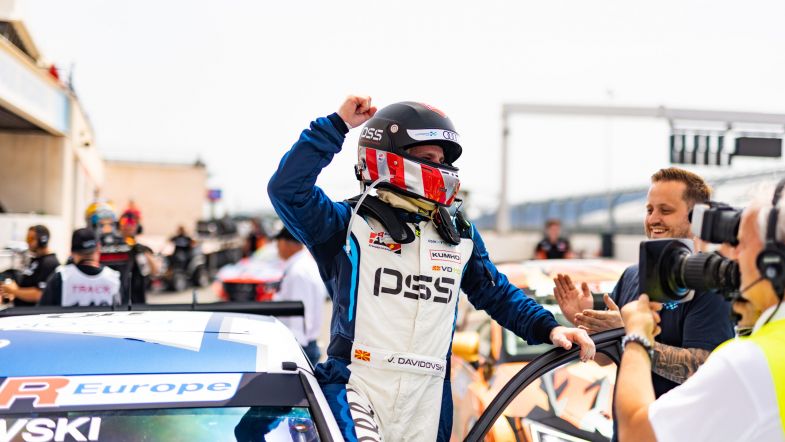 Comtoyou Racing won both TCR Europe races at Paul Ricard this weekend, and leaves the circuit holding a one-two in the drivers’ standings.

Tom Coronel took pole and won Race 1, while team-mate Viktor Davidovski started from the front of the reversed grid for Race 2 and converted that into a victory – the first ever for a driver from the Diamond Trophy classification.

Franco Girolami meanwhile finished the two races in second and fourth, and extended his points lead. However he could also have some small claim to the Race 2 win, as the Argentinian is Davidovski’s driver coach.

“Today I am very happy,” Davidovski said to Touring Car Times after claiming his breakthrough win. “First I want say thanks to my team and my engineer, and I did my best to win because today I had the pole position and I wanted to use the chance. And we won the race.”

Paul Ricard was where he claimed his only previous top-five finish, with a fourth place in last year’s reversed-grid race, and his best result at other venues on the TCR Europe calendar are ninth places at Monza and Jarama.

On whether he could appear on the podium again this year, Davidovski said: “We will see. Satisfied to be competitive in this championship, but we will see.”

Davidovski also praised Girolami’s input as coach, saying “for my driving performance he helped me a lot”, and it was a point that Girolami followed up on himself.

“We did a lot of work in the simulator trying to work hard, so he deserved it because no one put Viktor in this position. Viktor deserved [to be up there], he took the opportunity to win the race and he did it. So big, big congratulations to him and to Comtoyou.”

As title rivals Jack Young and Josh Files had issue-filled races, Coronel is now Girolami’s closest title opponent and he was set to cut into his lead in race two until he dropped to fifth on the last lap following a contentious pass on Pepe Oriola that was concluded off-track.

“I am very, very happy, because in the end we got a lot of points for the championship,” said Girolami. “We did second position yesterday, fourth position today. Obviously I am a racing driver and I am not 100% happy for my race pace today, but in the end in terms of the championship, I am really, really happy.

“More than 60 points per weekend, is so, so good. And also congratulations for the team because they won the two races, both yesterday and today, so this shows that the hard work of all the people in Comtoyou.”