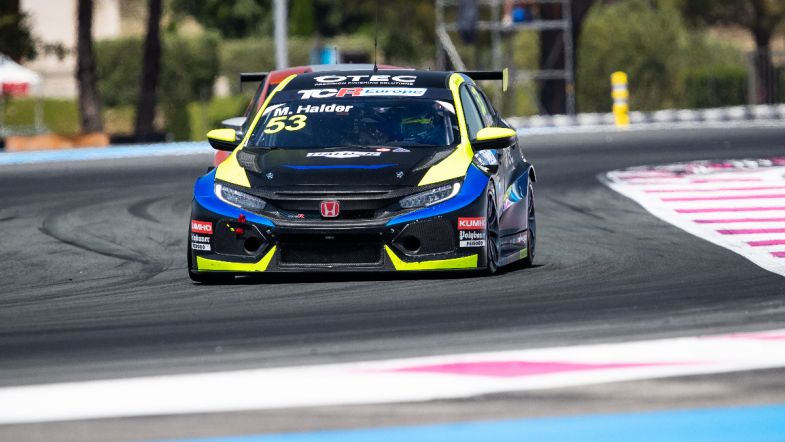 Halder Motorsport duo Mike Halder and Jack Young will have to start TCR Europe Race 2 at Paul Ricard from the back of the grid after changing the engines in their Honda Civic Type R TCRs.

Young and Halder were sixth and 14th in qualifying, and in Race 1 it looked like Young would be able to maintain that position until the penultimate lap when a front-left puncture led to him pulling off and ending his race early.

Halder moved up the order from his starting spot, and made it into the top 10 following Young’s retirement. However post-race it emerged both cars were carrying engine damage.

“We broke two engines yesterday,” Halder revealed to TouringCarTimes. “When I was in the last corner the water temperature went very high, and then the cylinder head broke. So now we have new engines in both cars and starting from the back and then we will see.”

Young added: “We just found water and something in the [bell housing], something like that. They just gave me the phone call last night when I was at the hotel, so, I was just like ‘oh, okay, there’s much that I can say’.

“I think we were lacking on bar in qualifying and the race. I mean it is what it is, we’ll just have to take it and go again today.”

The Race 1 retirement dropped Young down the championship standings, having started the race as Franco Girolami’s main title rival.

It will be Comtoyou Racing’s Viktor Davidovski who will start Race 2 from pole on the reversed grid, having qualified 10th in his Audi RS 3 LMS TCR. The race is scheduled to start at 12:15 CEST.