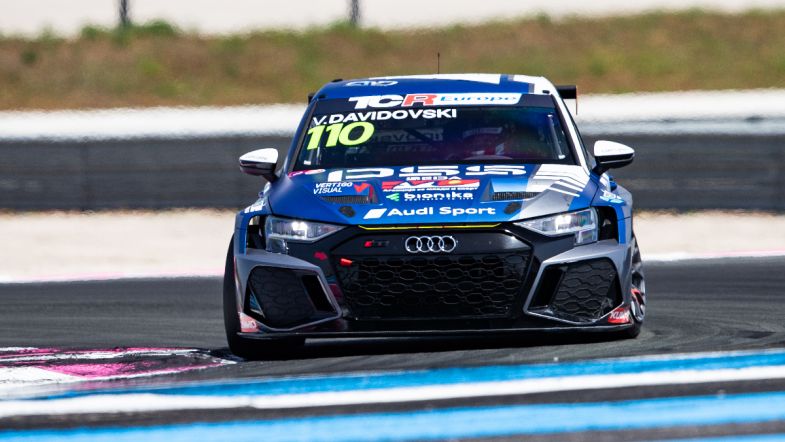 Viktor Davidovski became the first ever Diamond Trophy entrant to claim an overall victory in TCR Europe by triumphing in the reversed-grid race at Paul Ricard.

The Comtoyou Racing driver got to start his Audi RS 3 LMS from pole, although didn’t actually line up at the very front of his grid spot, and kept it clean through the first corner of the race while many in the pack behind ran wide into the run-off.

Volcano Motorsport’s Klim Gavrilov passed Brutal Fish Racing Team’s Pepe Oriola for second on the run down the pit straight, but, along with Gavrilov’s team-mate Isidro Callejas, went off at the exit of the first corner as the Volcano drivers almost made contact.

Gavrilov returned to track in second place, with Oriola slotting into third and Callejas briefly in fourth until he made an error and points leader Franco Girolami slipped through.

The top four raced away, and Gavrilov initially didn’t have the pace to match the leader. Davidovski was sitting 1.2 seconds ahead by the halfway point of the race, but Gavrilov looked after his tyres and closed back in through the race’s second half. The gap got down to half a second with a few laps to go and then stagnated, with Davidovski’s mirrors full of the cars behind.

A mistake-free drive meant he held on to claim his first win on his 46th TCR Europe start, and also his first podium in the series as his previous best result was fourth in last year’s reversed grid race at Paul Ricard.

After clearing Callejas in the middle of the race, Race 1 winner Tom Coronel had to close down a big gap to the top four but he managed to dit and passed team-mate Girolami with two laps left to run. He then chased Oriola and cleared him at the chicane on the last lap, but his pass was off-track and approaching the finish he avoided a penalty by dropping back down to fifth behind Oriola and Girolami. He remains second in the standings despite conceding those additional points, while Gavrilov has risen to third in the championship.

John Filippi wanted to join the battles ahead but was another driver who spent much of his race trying to clear Callejas, which he managed to do to secure sixth place. Josh Files had sat in sixth early on, but the Target Competition driver had an issue at the front of his car that led to bodywork rubbing against his front-left tyre and he had to pit. He eventually returned to track after a lengthy examination of his car, and finished 17th.

Pre-race engine changes force Halder Motorsport duo Jack Young and Mike Halder to the back of the grid, but their recovery drives did not reward them with points. Young made it up to 13th place, while Halder also gained positions but then had to retire his Honda Civic Type R TCR.

The next TCR Europe race takes place on June 18-19 at Spa-Francorchamps.