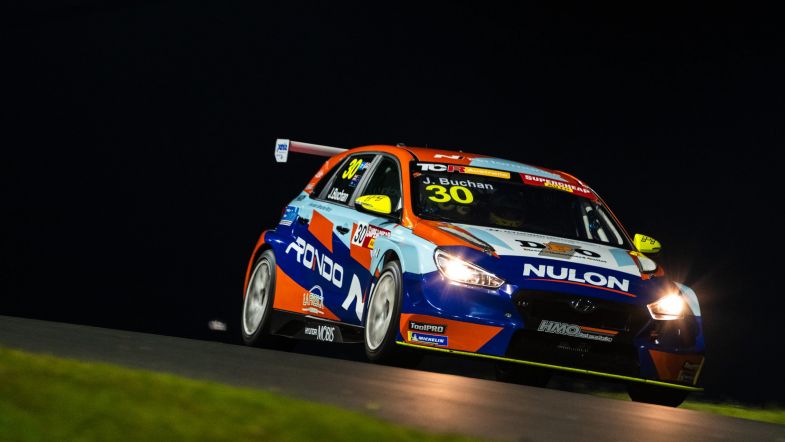 The HMO Customer Racing driver started from pole and never looked back after the lights went out.

Audi driver Will Brown meanwhile was slow off the blocks from second position on the grid and dropped down to third behind the fast starting Peugeot driver Aaron Cameron.

Brown found himself under attack from GRM drivers Dylan O’Keeffe and Jordan Cox.

But the Melbourne Performance Centre driver managed to escape the clutches of the Peugeot duo and started to close in on leader Buchan.

Disaster struck Brown on lap six however when a suspension issue forced him into retirement.

This meant that Peugeot 308TCR driver Cameron found himself alone in second place ahead of Cox and O’Keeffe.

Another retirement came as Michael Caruso suffered a puncture on his Alfa Romeo Giulietta TCR, retiring from tenth position and handed the reversed grid pole to Audi driver Jay Hanson who took over the position.

Hyundai driver Buchan won the race by just below one second over Cameron, who headed GRM Peugeot team-mates Cox and O’Keeffe.

Zac Soutar brought his Honda Civic Type R TCR home in fifth position ahead of HMO Customer Racing driver Nathan Morcom who had qualified second but was dropped to seventh on the grid due to an engine change penalty.

Luke King and Tony D’Alberto rounded off the top eight.