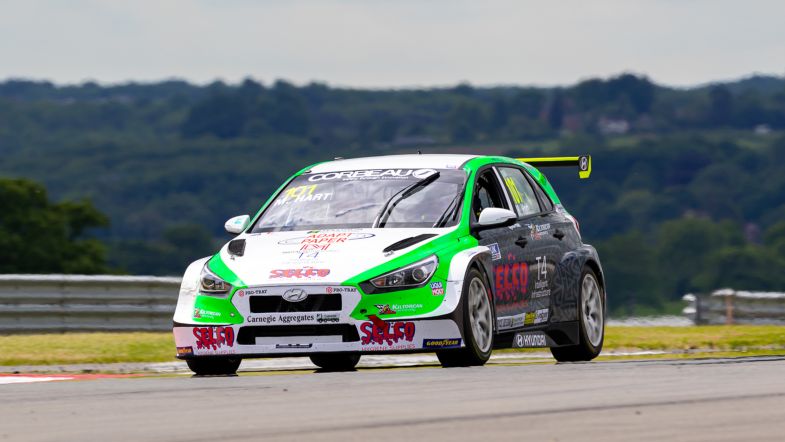 Max Hart produced a stunning drive from 10th on the grid to take his second TCR UK victory at Donginton Park to extend his lead at the top of the series standings.

The Jamsport Hyundai driver made short work of the field at the start of the race to run third early on, before passing Ant Whorton-Eales’s Subaru after a safety car restart.

Chris Smiley was similarly impressive in his Restart Racing Honda Civic Type-R, charging through from a lowly 14th on the grid to finish second, with Bruce Winfield completing the podium in third.

Polesitter Scott Sumpton bogged down off the start and dropped to fourth as Whorton-Eales leapt into the lead at Redgate in his Subaru WRX STI TCR from the Audi of Brad Hutchinson.

Race 1 winner Max Hart also got a strong start from 10th on the grid to run a superb third place at the end of the opening lap, getting ahead of double reigning champion Lewis Kent.

Further back, Chris Smiley vaulted from 14th on the grid and worked his way through the mele at the chicane on the first tour, in which cold tyres accounted for both Isaac Smith’s VW and Matthew Wilson’s Cupra, to hold sixth.

Smith and Wilson suffered separate half-spins at the chicane entering the Grand Prix loop, with Smith trundling through the exit gravel trap before continuing as Wilson ended up in the barriers. That brought out the safety car.

Whorton-Eales led from the restart, getting a slight break as Hart and Hutchinson did battle for second place at Coppice before latching onto the back of the leading Subaru.

Hart then tried to driver around the outside of Whorton-Eales at Redgate before being shoved towards the gravel, with Hutchinson also getting a nudge from Kent behind.

Whorton-Eales’s Subaru struggled for pace, particularly in the final sector of the lap, which allowed Hart to take a tighter line at the last corner to seize the lead on exit on the seventh lap.

Behind, five cars disputed fourth place on the run to the chicane, with Smiley keeping clear of the battle between Alex Ley, Hutchinson, Jamie Tonks and Jac Constable. Four out of the five took to the gravel, with Ley coming out in fifth.

Smiley then inherited third place as Kent’s attempt to wrestle second from Whorton-Eales ended in disaster for the Hyundai Veloster driver, who went through the gravel on the exit of McLeans and then Coppice. Kent eventually came home eighth.

With Whorton-Eales’s Subaru lacking pace and Smiley’s Honda significantly lighter with less ballast, Smiley grabbed second at McLeans with just over eight minutes remaining and set his sights on chasing down Hart in the lead.

Whorton-Eales’s race then came to a premature end after an audacious move from Ley into the Melbourne Hairpin failed to come off; Ley hit the back of the Subaru under braking, causing race-ending damage.

Meanwhile, in the lead, Hart extended his margin over Smiley to 5.134s entering the closing stages, with the latter opening up a two-second gap over Bruce Winfield in third.

Off the podium in fourth was Jamie Tonks, who brought his Cupra across the line ahead of Hutchinson and Jac Constable.

Smith and Kent finished seventh and eighth after their off-track excursions earlier in the race, while Ley and Andy Wilmot rounded out the top 10.

Next up for TCR UK is a trip to Kent for round three at Brands Hatch Indy on the weekend of 18/19 June.