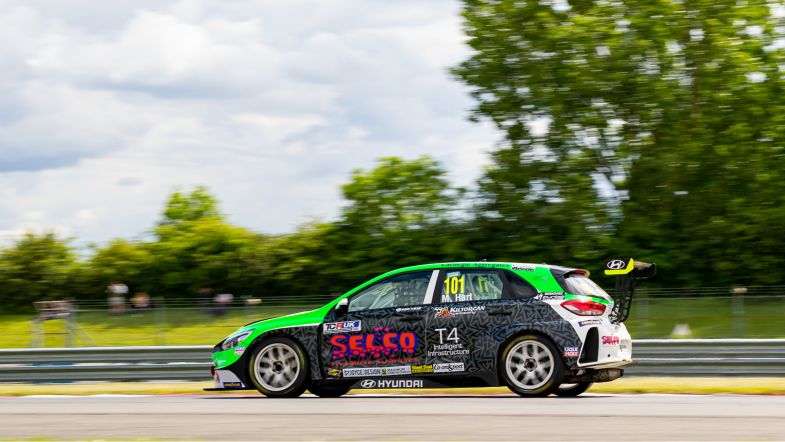 The Hyundai i30 N TCR driver made the most of contact between polesitter Chris Smiley and Adam Shepherd on the run towards Starkeys in the early stages to open up a nine-second margin over Bradley Kent at the finish.

Two-time defending Series champion Lewis Kent completed the podium in his Hyundai Veloster, after a lively battle with his brother and Shepherd.

Smiley got off the line well from pole and fended off the attention of Shepherd into Redgate as Brad Hutchinson was slow away in his BOND-IT with MPHR Audi.

The order at the front remained stable but changed dramatically when Smiley went off between Starkeys and McLeans. The Honda Civic Type-R ran slightly wide at the Old Hairpin, which allowed Shepherd and Hart to close in on the leader.

Shepherd pulled alongside the Honda as they negotiated through Starkeys but minimal contact between Shepherd’s left-front and Smiley-s right rear send the latter across the grass, rejoining on the exit of McLeans in sixth before pulling into the pits with a radiator full of grass.

Despite being slowed by the contact, Shepherd held onto the lead but a small mistake a few laps later allowed Hart to seize the lead on the exit of Redgate.

As Hart duly leapt away at the front, Shepherd fell into the clutches of the chasing Hyundais of Lewis and Bradley Kent.

The train of three cars meant that Hart’s victory was all but assured, while Bradley Kent moved into third as Lewis was held up by Shepherd on the exit of the final corner.

Bradley Kent then pulled off a sensational move around the outside of Shepherd at the chicane to grab second, before Shepherd eventually pulled into the pits with bodywork rubbing heavily on the front-left corner, a relic of his brush with Smiley.

With his brother and Shepherd out of the way, Lewis Kent found himself fighting the charging Cupra of Jamie Tonks, who had closed onto the back of the Veloster in the closing stages.

Tonks was faster than Kent in front and got past the Hyundai twice, only to run deep at the Old Hairpin and the at the final corner.

This not only secured Lewis Kent the final place on the podium, but also gave Issac Smith’s Volkswagen fourth at the flag.