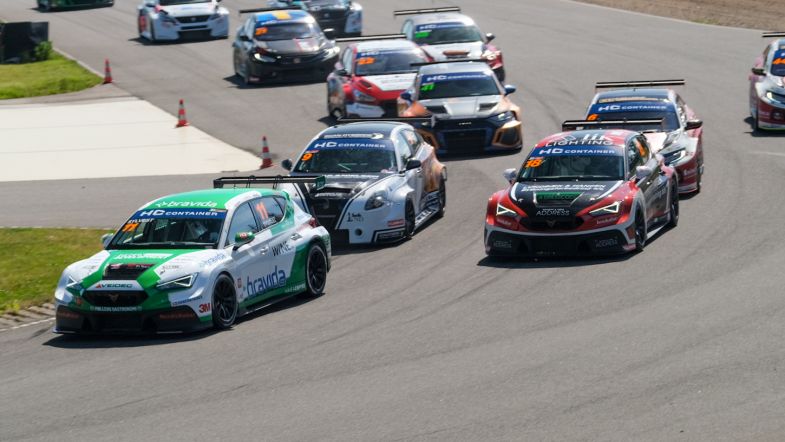 Nicolai Sylvest won a chaotic first TCR Denmark race at Ring Djursland, despite receiving a penalty for jumping the start.

The Cupra driver started from pole and got the jump on reigning champion Kasper Jensen who started alongside him on the front row.

Jensen got a poor getaway, seemingly distracted by the jump start of Sylvest, and dropped down to fourth behind Jacob Mathiassen and Michael Markussen.

GMB Motorsport driver Jensen was also handed a penalty for jumping the start, with the Honda driver dropping down to fifth behind Audi driver Jené Povlsen after taking to the penalty lane.

Sylvest meanwhile managed to drive through the penalty lane and still emerge in the lead ahead of Mathiassen.

The safety car was brought out after the first lap as Gustav Birch made contact with Philip Lindberg, sending the Hyundai driver into the wall and into retirement.

The safety car headed back in with six minutes left of the race and TPR Motorsport driver Mike Halder was on the move up after starting from the back of the grid due to a puncture in qualifying.

The German had gained eight positions on the first lap and continued his charge after the restart, passing team-mate Anton Bergström for seventh and a lap later Johnny Vejlebo for sixth.

Povlsen scored a strong fourth place finish behind the wheel of his Audi, ahead of Jensen and Halder.

Bergström and Vejlebo rounded off the top eight.

The second race of the weekend starts at 13:40 CEST.