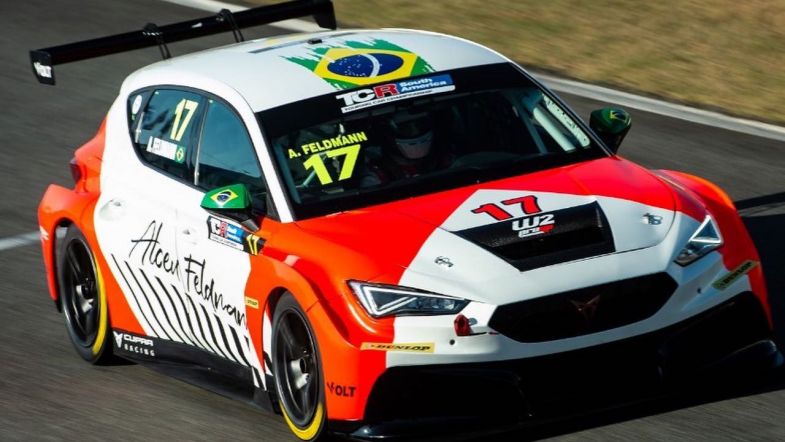 Qualifying had seen Feldmann grab pole position at the wheel of his Cupra León Competición having beaten Rosso’s Honda to pole – meaning Raphael Reis saw his run of starting from the front of the grid come to an end.

Reis had earlier paced the first part of qualifying – despite running off track on one of his first timed laps – but had to settle for third fastest in Q2, with points leader Fabrizio Pezzini lining up alongside him on the second row of the grid.

Before the race action kicked off, Guilherme Reischl’s Audi expired in a cloud of smoke before making it to the grid, leaving a field of 18 cars when the lights went out for the start.

Rosso jumped Feldmann off the line to hit the front on the run down to turn one, with the poleman holding on to second despite the best efforts of Pezzini – who did his best to get ahead on the outside line through the opening corners.

Reis meanwhile slipped back behind Pezzini into fourth with Sapag and Casella following behind.

Rosso led the early stages of the race with Feldmann giving chase, and the pair quickly managed to build a gap over Pezzini – who had his mirrors full of Reis’ Cupra.

Before Feldmann had chance to make a move for the lead, he was handed top spot in the race when Rosso was adjudged to have jumped the start, leaving the Honda driver to pit and serve a penalty that dropped him down to 14th spot.

The deployment of the safety car after a clash between Adalberto Baptista and Roberto Possas saw Feldmann lose his advantage at the front but he wasted little time in breaking away on the restart.

Quickly establishing an advantage of more than two seconds, Feldmann duly converted pole into the race one victory, with Pezzini able to keep Reis at bay to secure second spot.

Sapag and Casella followed behind, with Rosso – aided by the safety car closing up the field – involved in a drag race to the line with Federick Balbi’s Peugeot, which ended with Balbi taking the spot by just 0.004s.

Balbi – who stormed through the field from 15th on the grid – had earlier been involved in a heated fight with Pedro Aizza’s Hyundai that saw the latter slip down the order behind Bia Figueiredo and Marcio Basso to eventually cross the line in tenth.