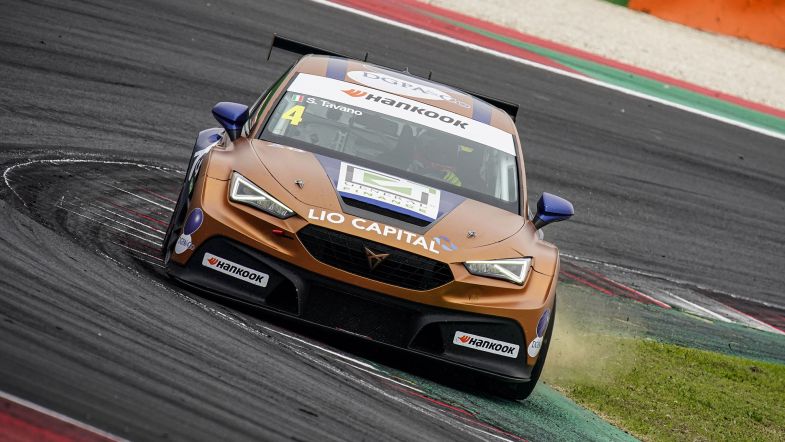 Scuderia del Girasole driver Salvatore Tavano (Cupra) claimed a comfortable victory at Misano, host of the third round of the 2022 TCR Italy season, in a race affected by hot temperatures.

The first start was aborted after problems with the starting lights and an extra formation lap was ordered by the race director.

Rubén Fernández (Cupra Leon Competición) and Francesca Raffaella (Hyundai i30 N TCR) collided on their way to the second grid, with the second start also aborted and the race distance reduced to 26 minutes (from the initial 30) plus one lap.

Tavano opened a gap at the front, with Iannotta coming under pressure from Poloni on lap six. Scuderia del Girasole’s Raffaele Gurrieri launched himself to the inside of Jonathan Giacon’s Fiat Tipo TCR, with both colliding and Giacon retiring to the pits with damage.

Half way through the race saw several drivers reporting tyre issues, with Carlo Tamburini (Honda Civic Type R TCR) coming to the pits at the end of lap ten for a tyre change.

Niels Langeveld came under fire at Turn 1 on lap 13 from Michele Imberti (Hyundai i30 N TCR), with the Dutch driver losing sixth place to the Italian.

Poloni slid off as he tried to attack Iannotta on the penultimate lap, with the Audi driver losing third place to Kevin Ceccon.

Tavano took a comfortable victory as the chequered flag fell, with Iannotta and Ceccon completing the podium.

Poloni had to settle for fourth place ahead of Brusa, Imberti, Langeveld and Denis Babu in eighth place.

“I managed to remain cool during the starting grid issues, when I had a lot of friction and managed to keep it ok for the third start,” explained Tavano after the race.

“We knew that there would be tyre issues so building a gap was fundamental, and we managed to do that after four or five laps.”

Tavano leads the championship on 188 points, 54 ahead of Langeveld and Ruben Volt who share second place.

The TCR Italy returns to the track on Sunday morning at 11:35 CEST for Race 2.