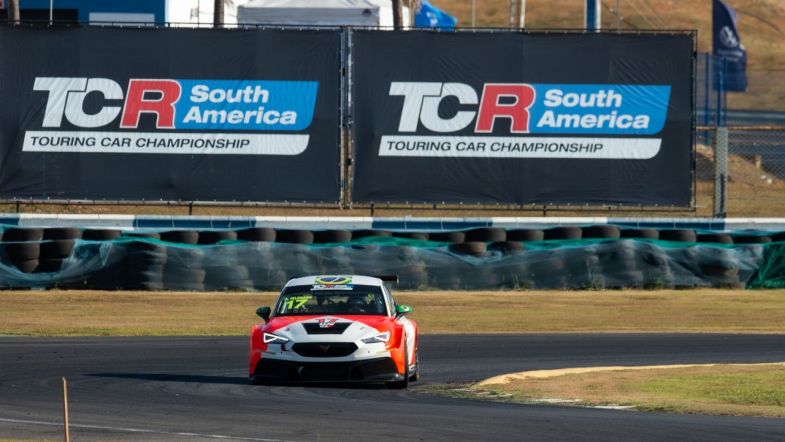 Alceu Feldmann doubles up at Goiânia

Alceu Feldmann made it two wins from two at Goiânia to complete a clean sweep of victories in the third meeting of the TCR South America season.

With Edson Reis missing from the grid, Bia Figueiredo was set to lead the field away at the start but the Audi driver was slow away from the line – as was fellow front-row starter Marcio Basso.

That allowed the fast-starting Peugeot of Juan Manuel Casella to rocket into the lead on the run to turn one ahead of Pedro Aizza’s Hyundai and the two PMO Motorsport Lynk & Cos of Jose Manual Sapag and Fabricio Pezzini.

Figueiredo dropped down to fifth, with Basso slipping back to ninth, and the polesitter would continue to drop down the order as she lost out to Raphael Reis, Juan Angel Rosso and Feldmann on the following two laps – with Feldmann also jumping ahead of Rosso to move into the top six.

Fresh from his victory in race one, Feldmann then sneaked ahead of Reis to move into fifth spot.

At the head of the field, Casella quickly started to build a lead over the chasing pack behind, with the main focus of attention being Feldmann – who soon closed in on the three-way battle for second spot.

Battling ahead of Pezzini into fourth, Feldmann then took third when Aizza dived into the pits in the Hyundai to serve a drive through penalty from second spot, promoting Sapag up into second and Feldmann into the podium positions.

Feldmann briefly managed to get ahead of Sapag on lap eight only to then go too deep into the following corner to lose the place, but it didn’t take long for the Cupra to make a move stick as he moved up into second – albeit more than four seconds down on Casella who had made the most of the squabbles behind to build a handy lead at the front.

As Feldmann set about trying to chase down the leader, Pezzini managed to dive ahead of team-mate Sapag into turn one at the start of lap ten to grab third spot.

By the end of lap 14, Feldmann has closed in the leader and then set about trying to find a way ahead, almost forcing his way past through the penultimate corner at the end of lap 15 and then drawing alongside on the outside line going into turn one at the start of the following lap.

Casella held on but Feldmann then attacked again later on the lap and this time was able to sweep ahead of the Peugeot to grab the race lead.

Despite trying his best to fight back, Casella was powerless to prevent Feldmann making it two wins from two for the weekend, with the Cupra driver crossing the line to secure the victory by little more than a second.

Casella would follow home in second, with Pezzini in a lonely third having broken away from the fight for fourth between Sapag and Rosso – which would be decided in favour of the PMO Motorsport racer.

Reis took seventh ahead of Figueiredo, with Franco Farina, Renato Braga and Aizza rounding out the top ten.

The next TCR South America round takes place at Riviera in Uruguay on July 16-17.