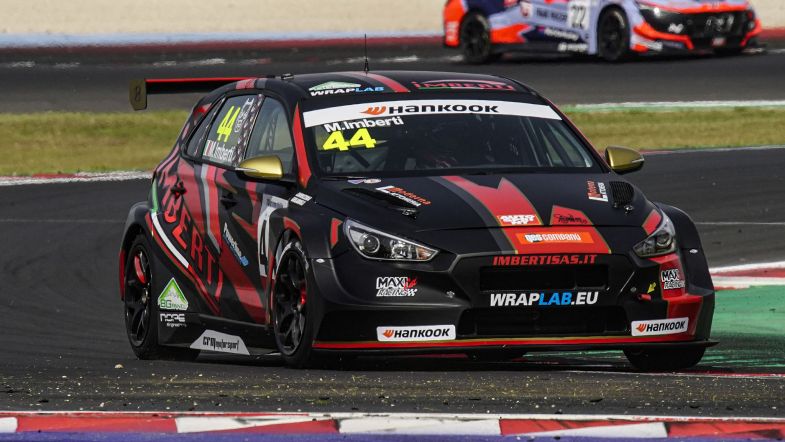 Michele Imberti claimed a lights-to-flag drive in the second TCR Italy race at Misano to achieve his first victory in the series.

At the start, the Italian kept the lead ahead of the Dutchman and Kevin Ceccon, who overtook Denis Babuin (Audi RS 3 LMS) for third at Turn 1.

The race was relaunched on lap five, with Imberti fending off Langeveld’s attacks as yesterday’s winner Salvatore Tavano (Cupra Leon Competición) was on the move up through the field, already mounting the pressure on Babuin for fourth place.

The safety car was called into action for the second time on lap seven when Ettore Carminati (Hyundai I30 N TCR) and Carlo Tamburini (Honda civic Type R TCR) came together when Tamburini was trying to overtake. The duo collided and tangled in an incident that also collected Francesca Raffaele’s Hyundai.

Tavano’s issues continued, with Cesare Brusa and Matteo Poloni also going through. The Cupra driver retired to the pits at the end of lap 14.

Positions remained stable but, on the last lap, Ceccon launched an attack to the inside of Langeveld, with both Hyundai drivers coming side-by-side. The Dutch driver managed to stay ahead but the scrap allowed Babuin to come under Ceccon’s rear bumper.

Imberti claimed his first-ever victory in the TCR Italy, with Langeveld and Ceccon completing the podium.

Babuin was fourth, followed by Fernández, Iannotta, Brusa, Poloni and the Hondas of Mattias Vahtel and Antti Rammo completing the top ten.

“It was a beautiful race, fantastic for me,” Imberti said after the race. “It is a great victory for us and I’m very happy for myself and the whole team.”

Despite his retirement, Tavano continues leading the championship after the races at Misano with 188 points. Langeveld is second, 19 points behind. Ceccon is third, 45 points adrift.

The next round of the TCR Italy takes place at Mugello from the 14-17th of July.