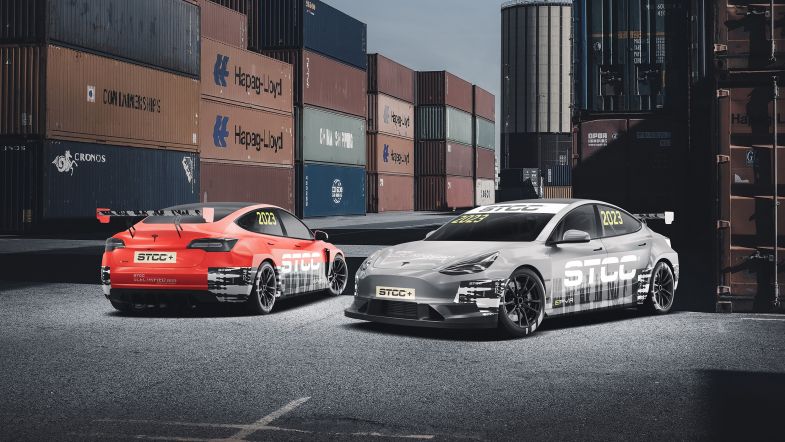 The STCC will become the first national touring car championship in the world to switch to electric power for the 2023 season in a revamp of the Scandinavian series.

The series has run using TCR-spec cars since 2017 but will now introduce a new car that is currently being worked on by the Swedish company EPWR.

Cars will be based on production models that are available to the public and which have then undergone extensive modifications in order to go racing, with the Tesla Model 3 being the first car to be revealed for the inaugural season.

The cars will be rear-wheel driven and powered by 550hp electric motors that allow for top speeds of close to 300km/h, and which will see them hit 100km/h in under three seconds.

Whilst the calendar has yet to be revealed, it will include a street race on a new circuit in the central harbour of Helsingborg in mid-June after a three-year agreement was signed with the Swedish city.

“This is the single most important step forward for the STCC and Scandinavian motorsport since the start of the championship in 1996 – we are writing history today,” Micke Bern, Managing Director of STCC said.

“Together with key partners, we have worked hard with this over many years and the conditions are finally here to launch this in a sustainable way. Our base philosophy is to inspire society to a sustainable transition through spectacular electrified racing.

“The fact that we are also able to return street races to the calendar together with Helsingborg is another message of strength that this programme enables.”

Twelve cars are currently in build for the 2023 season, with Brink Motorsport and Exion Racing the first two teams set to be part of the grid.

Which car the two teams will use has yet to be announced.

“The electrification of the STCC is decisive for the future of our operations and we are very much looking forward to digging our teeth into the transition that we have ahead of ourselves, alongside our current STCC TCR Scandinavia programme.”

Testing of the new cars will continue in the hands of Mikaela Åhlin-Kottulinsky, who has been part of the project since the first prototype was ready in 2018.

“The new STCC cars are insanely fun and challenging to drive, the difference to the race cars of today is like night and day,” she said. “The power and the low centre of gravity that the batteries entail makes the driving experience as close to single seaters that you can get, but with the amazing racing of touring cars still there.

“I have believed in electric racing for a long time and it’s amazing to be a part of the development since day one. I’m really looking forward to 2023!”

The STCC organisation has confirmed that TCR cars will continue during the STCC weekends in 2023 and beyond, running under the TCR Scandinavia banner.