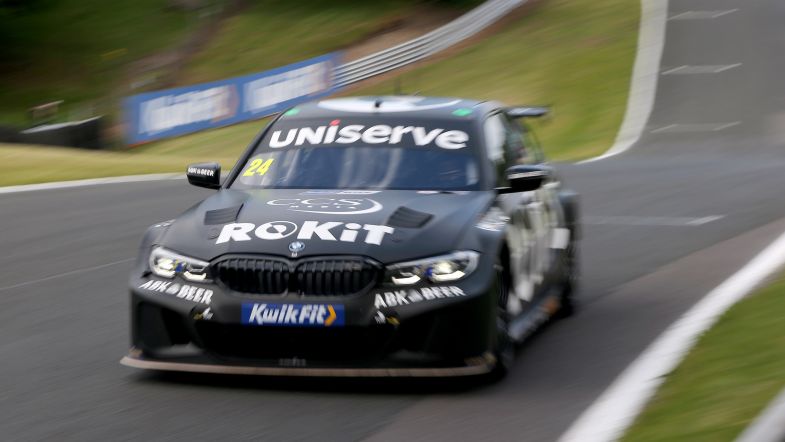 Jake Hill was left to rue contact with Tom Chilton in the latter stages of qualifying at Oulton Park as his run of front row starts in the BTCC came to an end.

Hill had qualified on the front row for each of the first three meetings in his WSR-run BMW but the Cheshire weekend would start in challenging fashion with the team struggling to extract the maximum from its cars in practice.

Having been tenth quickest in the second session, Hill was hopeful of trying to push on in qualifying but a clash with Chilton as the Hyundai racer exited the pits saw Hill forced off across the grass on the run down the Avenue – filling the radiator of the car with debris.

With that removed, Hill was then prevented from improving his time when the session was red-flagged a second time when the Infiniti of Aiden Moffat came to a halt, meaning the ROKiT-backed BMW will line up 15th on the grid.

“Ultimately my chances of qualifying up where Colin was [P9] were ruined because of the incident on my second run when Chilton came out of the pits and came straight across the track and put me on the grass,” he said. “My tyres were done after that, so my opportunity was gone. It hasn’t been an easy day and having so little hybrid compared to some of the other cars is really hurting us.

“Fifteenth isn’t a good position to start from, but I’ll stay focused, try to move forward as much as I can in every race and see if I can be in a position to benefit from the reversed-grid draw for Race Three.”

Chilton for his part was quick to apologise to Hill for the clash, which resulted in him being given an official reprimand and two penalty points on his licence.

His EXCELR8-run car is also now undergoing an engine change after the cooling system was damaged when he too took a trip across the grass.