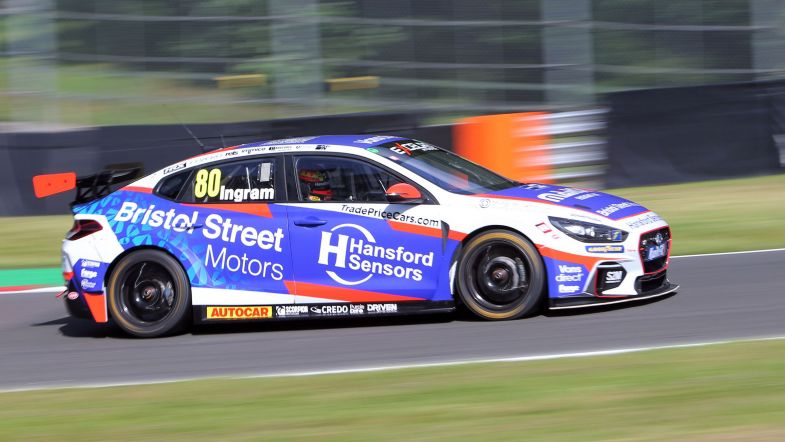 Tom Ingram secured a first pole position for EXCELR8 Motorsport and for the Hyundai i30 Fastback N after topping the times in qualifying for the fourth meeting of the BTCC season at Oulton Park.

Ingram was the first driver in the session to break the 1:26s mark as he set the early pace ahead of Adam Morgan’s BMW and the Honda of Dan Rowbottom – which had earlier led the way in the second practice session.

Ingram remained out front as the clock ticked down towards the final five minutes despite the best efforts of his rivals to find a way ahead, with Rory Butcher vaulting up the order into P2 with a storming lap in the Toyota that allowed him to edge ahead of Morgan.

Dan Cammish and Gordon Shedden also dragged themselves up into the top six – the latter despite losing multiple times to track limits – with WSR pair Jake Hill and Colin Turkington amongst those struggling outside the top ten when Rick Parfitt’s Infiniti ground to a halt to bring out a red flag.

The clock was reset to ten minutes as the Team HARD car was recovered and there was drama for Hill when contact with Tom Chilton’s Hyundai on the run down to Cascades saw the BMW run across the grass – leaving the radiator full of grass and forcing him back into the pits.

Ash Sutton was the first driver to improve as he rocketed up into fourth spot and then on the following lap, the defending champion went purple in the first sector at the wheel of the Focus.

Sutton abandoned his lap and returned to the pits having got out of shape just as Dan Lloyd’s Hyundai jumped into third but before there was the chance to further improvements, Aiden Moffat’s Infiniti came to a halt to bring out the red flag and end the session.

It left Ingram on pole ahead of Butcher’s Toyota, with Lloyd taking his best qualifying result of the year in third spot.

Morgan in fourth was the best of the BMW drivers on his home circuit ahead of Sutton and Rowbottom, with Cammish having to settle for seventh having lost another quicker lap to track limits.

Shedden ended up with the eighth best time ahead of Colin Turkington as he dragged himself into the top ten this weekend, with points leader Josh Cook rounding out the top ten.

After his clash with Chilton, Hill had to settle for 15th on the grid, leaving him with work to do on race day.