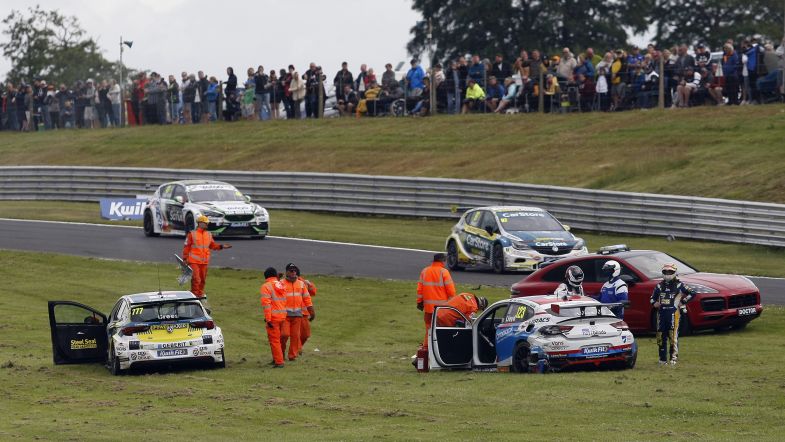 Daniel Lloyd and Colin Turkington have both escaped without serious injury after their high-speed accident in the final BTCC race of the weekend at Oulton Park.

Lloyd was dicing for position with Ricky Collard on the opening lap of the race when contact between the pair saw him tipped into a spin that saw his EXCELR8 Hyundai make heavy contact with the barriers before bouncing back into the middle of the track.

As cars behind took avoiding action, including Lloyd’s team-mate Tom Ingram, an unsighted Turkington was powerless to avoid making heavy contact with the stricken car, with Michael Crees also getting caught up in the incident.

It left Lloyd’s Hyundai and Turkington’s BMW suffering heavy damage and after the pair were able to climb from their damaged cars and taken to the medical centre, Lloyd was then taken to a local hospital for further scans which have shown bruising to a lung.

“I’ve had an X ray and a CT scan and something didn’t sound right in my chest to the doctor, so I feel very lucky with the end result,” he wrote in a social media update.

“I’m devastated about what happened on track. It was avoidable on my part but as soon as some contact was made, I was stuck and couldn’t turn out of it. The car is beyond a mess so hopefully we can find a way of getting out. Thanks to all the medical staff at the circuit and thanks for the messages of support; it means a lot.”

Turkington meanwhile was left with soreness in his neck and chest after the impact but was able to head for home after he too was released from the medical centre.

“It was a really good day before race three,” he said. “To have qualified ninth and then had fourth and third was a big step forwards and we made the BMW super-competitive. Championship-wise it was exactly what we needed.

“In race three, the cars went either way in front me and I just had no chance to avoid the stationary car. It was a big hit. I’m pretty sore but I’m sure I’ll be fine in a few days.”