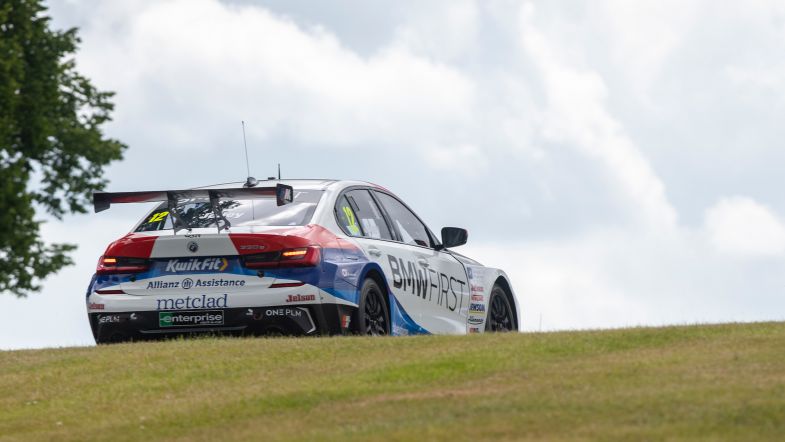 Stephen Jelley secured his first win of the BTCC season in race three at Oulton Park in a race that saw two of the fancied runners eliminated in a huge incident on the opening lap.

Jelley led the field away at the start from Aiden Moffat and Ricky Collard with Dan Lloyd slotting into fourth as Jake Hill was run wide through turn one – before then running deep into the Island hairpin and drop down the order.

However, on the run over Hill Top, there was chaos in the pack as Lloyd – who had made a move on the outside of Collard exiting the hairpin – was tipped into a spin and slammed into the barriers before coming back across the circuit into the middle of the pack, where he was collected by Colin Turkington’s BMW and the Vauxhall of Michael Crees.

The race went behind the safety car as the drivers were all able to climb from the cars, with the Hyundai and BMW picking up heavy damage, with a number of drivers – including Ash Sutton and Tom Ingram – forced to pit to have grass removed from their radiators after going off track to avoid the incident.

Jelley led the way behind the safety car from Moffat, Collard and Cook although it soon became clear that Collard wouldn’t be a factor in the podium fight when he was handed a five second penalty for a start infringement.

Once the action resumed, Jelley was able to control the race from the front of the field to secure his first victory of the campaign having edged away from Moffat, with little in the way of action towards the sharp end of the field despite Adam Morgan’s best efforts to find a way ahead of Dan Cammish.

Collard’s penalty moved Cook into third ahead of Gordon Shedden and Rory Butcher, with Cammish taking sixth and Collard dropping in between him and Morgan into seventh.

Ash Hand and Aron Taylor-Smith then rounded out the top ten.

The main focus instead became a huge battle towards the lower reaches of the points, with Hill, Ingram and Sutton charging through the pack until they found themselves battling with Ollie Jackson and Dexter Patterson for the final points.

Hill would eventually manage to fight ahead of the pair to get 13th spot, with Patterson in particular battling hard to ensure he could score his first points in 15th spot, with Sutton and Ingram the two quicker drivers who missed out.