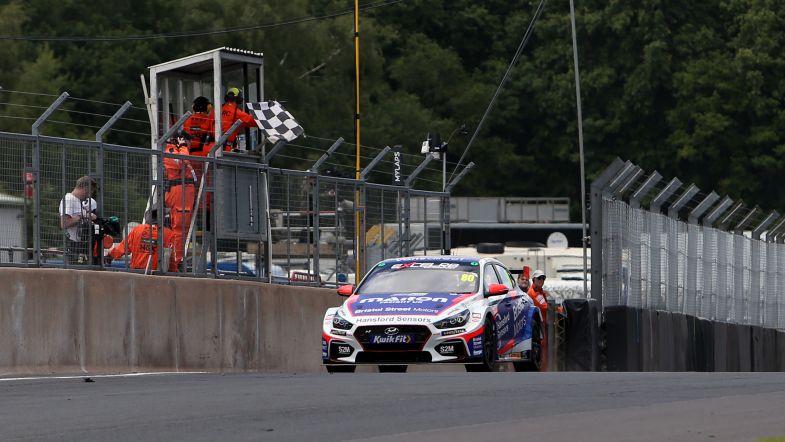 Tom Ingram makes it two from two at Oulton Park

Tom Ingram wrapped up a second win of the weekend with a lights-to-flag success in the second BTCC race at Oulton Park.

Ingram had taken victory in the opening race having qualified on pole position at the wheel of his Hyundai i30 Fastback N and as in race one, the EXCELR8 Motorsport driver was able to hold onto his lead when the lights went out at the start.

In the early stages, Ingram built a slender lead over Ash Sutton behind and the pair would trade fastest laps as they eased away from Rory Butcher’s Toyota behind.

Sutton would never get close enough to make a move however, leaving Ingram to secure what was the 300th race for an NGTC-spec car in the series.

Sutton followed him home in second, with the only changes in position in the top three coming on lap eight when Colin Turkington went around the outside of Butcher at Island to grab a place on the podium.

Butcher was left to settle for fourth spot ahead of Gordon Shedden, who spent the whole race caught up behind Dan Cammish’s Ford before nipping ahead at the hairpin on lap ten.

That left Cammish to finish in P6 ahead of Jake Hill, who worked his way through from tenth at the end of lap one to seventh, with Dan Lloyd, Josh Cook and Ricky Collard rounding out the top ten.

Cook still holds the championship lead, but only by virtue of the fact he has more wins that Ingram with the pair level on points – with Sutton only three behind after making it five straight podium finishes.

Aiden Moffat and Stephen Jelley will share the front of the grid for the final race after the top twelve on the grid were reversed.

After his DNF in race one, Adam Morgan battled his way through to 16th place.