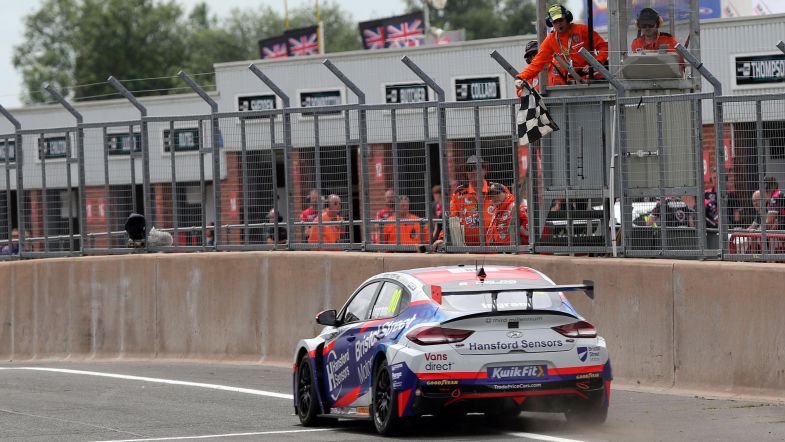 Tom Ingram scored his first BTCC victory at Oulton Park with a lights-to-flag victory in the opening race of the weekend.

Ingram qualified on pole in his EXCELR8-run Hyundai and was able to hold his lead when the lights went out ahead of Rory Butcher and team-mate Dan Lloyd – with Adam Morgan from P4 not launching up the order as many had expected.

In fact, Morgan ended up slipping back on the opening lap to drop to fifth spot, with Ash Sutton getting ahead at the hairpin to move into the top four.

The early laps would be relatively quiet towards the sharp end of the grid, with Gordon Shedden the big mover as he jumped up two spots into sixth and the Team Dynamics driver would be involved in of the key moments of the race on lap four when contact with Morgan exiting Lodge saw the BMW driver spin off into the tyres to bring out the safety car.

When the action resumed, Ingram was able to control proceedings from the front to take the win but there was all change behind, with Lloyd trying to make a move on Butcher at the hairpin only to open the door for Sutton to nip through into third.

The defending champion would then make a fine move around the outside on the run down Cascades to get ahead of Butcher into second spot, but he was powerless to chase down the Hyundai ahead as he settled for the runner-up spot.

At the same moment Butcher dropped behind Sutton, he was also jumped by Shedden, who had managed to battle ahead of Lloyd’s Hyundai a lap earlier.

That left the Honda man with third place ahead of Butcher, with Colin Turkington and Dan Cammish rounding out the top six; both having cleared Lloyd when he ran across the grass at Knickerbrook.

Cammish had run ahead of Turkington, but the BMW driver got ahead on the penultimate lap.

After his dramas in qualifying, Jake Hill could only manage 13th after an action-packed race that left his BMW carrying plenty of battle-scars.