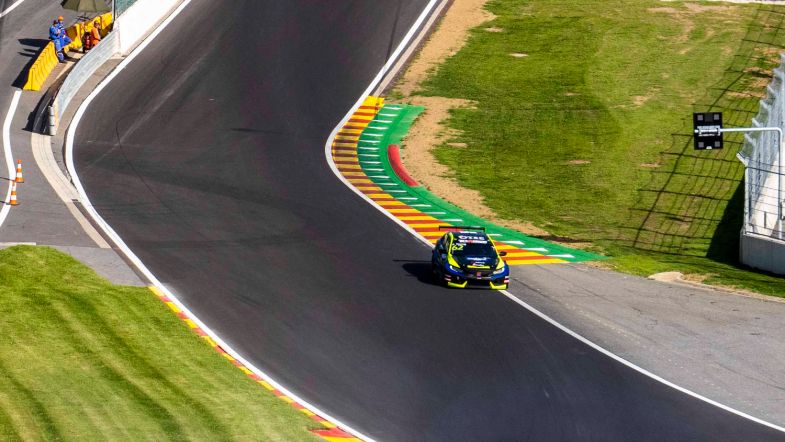 Halder Motorsport’s Jack Young was the driver to beat almost from start to finish in the second TCR Europe practice session at Spa-Francorchamps, and was fastest by a comfortable margin.

Young was the first driver on track in his Honda Civic Type R TCR, and his first flying lap – a 2:31.872 – put him over 3.3 seconds clear of Sébastien Loeb Racing’s John Filippi in second place. Filippi then improved to get within a second of Young.

The order didn’t change again until after 11 minutes when championship leader Franco Girolami went three quarters of a second faster than Young with his second flying lap.

There was further change as the halfway point of the half-hour session approached, with Young being shuffled down to fourth by Target Competition duo Josh Files and Nicola Baldan. There was also yellow flags for a brief period as Janik Motorsport’s Mat’o Homola, who like the Target drivers was in a Hyundai Elantra N TCR, had an issue that led to him having to go slowly through the second sector of the lap.

Once the track was fully green again, Young returned to the top by becoming the first driver to lap sub-2:31.000 and go three tenths up on Girolami.

The gap between the top two was trimmed to 0.271 seconds when Volcano Motorsport’s Isidro Callejas went second fastest with just over two minutes to go of practice, and Young waited until the very end to set his eighth and final lap – the joint least of anyone – to improve his pace and finish the day’s running 0.786s clear of the field.

Behind Young, Callejas and Girolami was Comtoyou Racing’s Tom Coronel, who was fastest in first practice, and Volcano’s Klim Gavrilov.

RC2 Junior Team’s Ruben Fernández made it on track and was 21st fastest, having missed the morning session due to not yet having arrived at the track, and the debuting Marco Butti totted up 10 laps in his Comtoyou-supported Elite Motorsport-run Audio RS 3 LMS II after having his mileage restricted to just two laps in first practice due to a driveshaft issue.

The next session for the TCR Europe drivers is qualifying on Saturday, which starts at 10:40 CEST (09:40 BST).