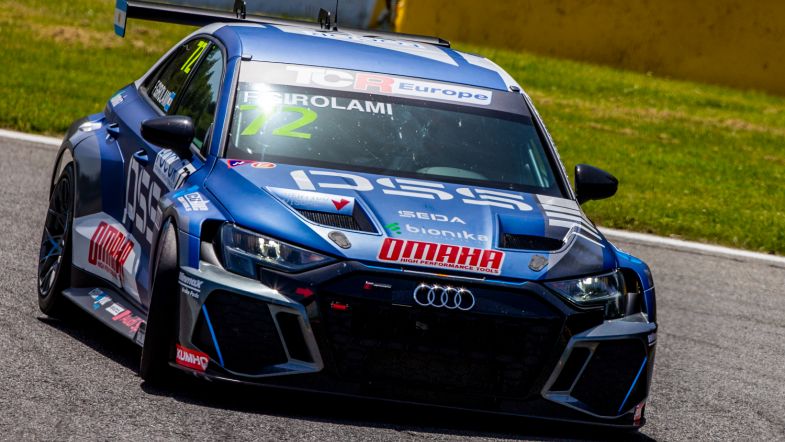 Klim Gavrilov was straight to the top in Q1 in his Cupra León Competición, heading Volcano Motorsport team-mate Isidro Callejas. Comtoyou Racing pair Tom Coronel and Girolami moved up to second and third a while later, as Gavrilov headed straight back to the pits.

There were no improvements within the top six from those who stayed on track, and when Gavrilov left the pitlane he did not immediately find any more pace either. With just over four minutes remaining there was finally a change in the order as Callejas went to the top with a 2:30.938 with his fourth flying lap, putting him five hundredths of a second ahead of his team-mate.

But that lap proved an exception as again drivers failed to match the pace they had set at the very start until with 20 seconds left on the clock a 2:30.629 came in from Target Competition’s Felice Jelmini. Halder Motorsport’s Jack Young slotted into second, and Nicola Baldan rose to third in another of Target’s Hyundai Elantra Ns and only 0.083s off pole.

There was no response from the earlier top two, Gavrilov and Coronel, as they had already decided to pit. They still comfortably made it through to the second segment of qualifying though as they were sixth and seventh fastest, behind Josh Files and ahead of Girolami who was less than half a second off the pace in his Audi RS 3 LMS II but down in eighth.

Q2 followed a similar pattern to Q1, as Gavrilov was first to get a lap on the board and went fastest in doing so. His 2:30.110 stood as the best until Girolami came around, far later than the rest of the frontrunners, and went almost a third of a second faster.

There was time for two more laps for everyone, but the only driver who did improve was John Filippi down in 11th place – meaning he missed out on the points on offer for the top 10 on the grid – and it meant Girolami took his first pole of the season with a 2:30.110 lap.

Gavrilov and Callejas qualified second and third, with Target trio Baldan, Felmini and Files in fourth, fifth and sixth as they kept their focus on tyre preservation for this weekend’s races.

Young pipped Janik Motorsport’s Mat’o Homola to seventh place, while Coronel was 1.1s back in ninth in his Audi RS 3 LMS.