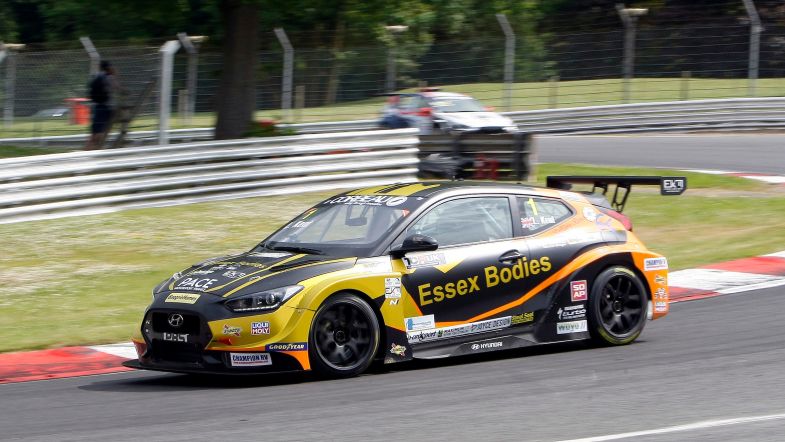 Lewis Kent saw off the challenge of Chris Smiley and Callum Newsham to take the opening TCR UK Championship race of the weekend at Brands Hatch.

Qualifying had seen Bradley Kent put his Essex & Kent Motorsport Hyundai onto pole position ahead of impressive rookie Alex Ley – who missed out on securing his first pole by just 0.007.

Defending champion Lewis Kent put his Veloster N TCR into third ahead of Newsham’s Cupra, with the top six on the times rounded out by Adam Shepherd and Bruce Winfield.

Shepherd however would drop to the back of grid for the opening race, having undergone an engine change on his Jamsport car, moving Smiley’s Honda up onto the third row.

Bradley Kent held onto the lead when the lights went out for the start of the race, but with rain starting to fall, multiple drivers would hit trouble on the opening lap, with Steve Gales clouting the barriers in his Audi and Jamie Tonks spinning his Cupra.

That resulted in the safety car being called out, before the race was then halted to allow cars to be removed from the circuit and everyone to get wet tyres fitted.

When the action resumed, Bradley Kent once again held onto the lead when the lights went out, with brother Lewis running behind and Smiley slotting into third ahead of Ley and Winfield.

The younger Kent led the first two laps before Lewis made his move at Paddock Hill Bend, with Smiley then following through on what was already a drying track going up to Druids.

The poleman was clearly struggling on the slippery circuit, and within a matter of laps, both Ley and Issac Smith had also nipped ahead – with Smith also clearing Ley to move into third.

That wouldn’t last for long however, with Smith then running wide at Paddock on the following lap to slip back behind Ley into fourth just before the safety car came out to retrieve the Vauxhall of Darelle Wilson from the gravel after a clash with Jess Hawkins at Paddock Hill.

The action resumed on lap nine with Smith quickly getting back ahead of Ley into third as Bradley Kent continued to slide back down the order and out of contention.

Newsham cleared Ley to move into fourth and then heading into lap twelve, he got the inside line on Smith to move ahead of his former MINI rival into third and then set off after Smiley ahead – taking a second out of the Restart Racing Honda to close in the man ahead.

By the end of lap 14, the top three were covered by less than a second, with Lewis Kent continuing to head the pack from Smiley and Newsham, with Smith having dropped away in the VW but having a slender gap over a charging Shepherd – who had romped through from the back to sit in fifth.

Through the final laps, Newsham was unable to find a way ahead of Smiley to challenge the leader, giving the win to Lewis Kent for the first time in the Veloster.

Smiley and Newsham followed close behind, with Smith, Shepherd and Ley rounding out the top six.

Jac Constable’s Cupra would take the flag in seventh, with Max Hart, Ant Whorton-Eales and Bradley Kent rounding out the top ten.