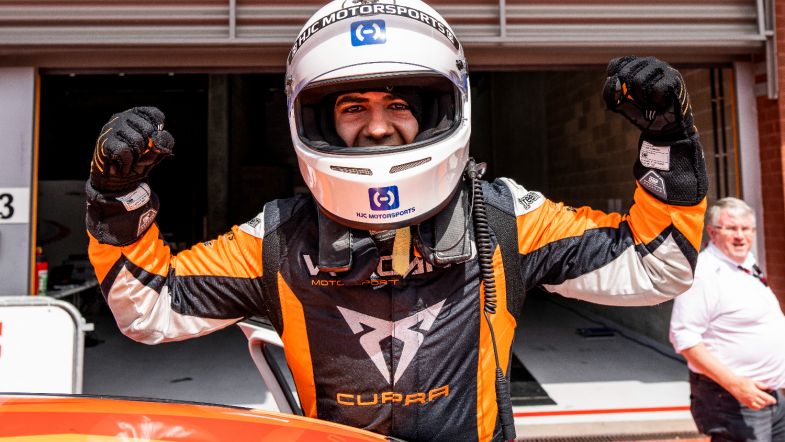 Isidro Callejas has described the “really great” feeling of his maiden TCR Europe win, which earned by hounding Franco Girolami until the leader made a mistake.

Volcano Motorsport driver Callejas only had one podium in the series prior to this weekend’s Spa-Francorchamps round, but did well to qualify third and spent Saturday’s race in second place until the final lap when Girolami – who had led all the way up until that point from pole – locked up into Les Combes and gifted the lead to Callejas.

In addition to it being the first win for Callejas, it was also the first success for the Cupra León Competición car in 2022.

“It’s my maiden win so it feels really, really great,” Callejas said to TouringCarTimes. “When you bring it home it feels special, and to do it here in Spa, even better. It was a great race. I was always on the slipstream of Franco, and putting on pressure to make the mistake.

“I was really conserving the tyres because I know that here the track is so long you kill the tyre really, really easy. So for me it was really easy because we have in this position we have trained so much with the long runs, and it was quite good.”

Sunday’s reversed grid will be a harder task for Callejas to take a top result from, as he starts in eighth place. But his target is “to do a great start and then try to catch the podium”.

Beyond this weekend, the third of the season, the 17-year-old Spaniard wants to be a regular frontrunner in TCR Europe and fight for a top position in the standings.

“For sure the target this year was to get into the top three positions in the championship,” he said. “So after a really bad race at Paul Ricard, I think we have now the line, we have to continue on this line working with the team and with my engineer.”

It was a strong day for the Volcano team on Saturday, as Klim Gavrilov qualified second and finished sixth, and Evgeny Leonov took the Diamond Trophy win in 10th place overall.