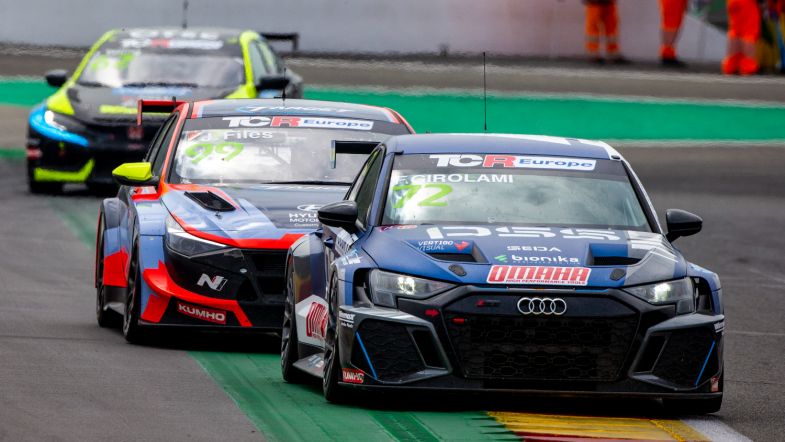 Franco Girolami extended his TCR Europe points lead over Tom Coronel at Spa-Francorchamps, but his eye on the bigger picture meant he actually allowed it to be cut in race two.

The Comtoyou Racing team-mates entered round three of the season split by 13 points following Coronel’s win at Paul Ricard, and that grew to 21 after Spa qualifying as Girolami scored 10 points for pole and Coronel only earned two as the ninth fastest driver in Q2.

In race one Girolami was on course to more than double his margin at the top of the table until a final lap lock-up handed victory to Volcano Motorsport’s Isidro Callejas, and second place to Coronel’s fifth meant the gap grew to 32 points instead.

The reversed grid for race two meant Coronel was on the front row while Girolami started 10th, but they finished just one position apart as a slow start meant Coronel came third and an excellent start from Girolami resulted in him climbing to fourth in just one lap. So why didn’t Girolami climb any higher?

“It was quite different [to race one],” he explained to TouringCarTimes. “Obviously with 20°C less in the track, the car was quite good. Better also for the tyres, with less temperature. And also we did a lot of changes in the car.

“I think we found some way to continue working. But that’s it. The key was the start. I did very well the start, P10 to P4 in the first lap, and then I thought that the work was done so I tried to not take too many risks. For the championship it works [with that approach].”

However focusing on winning the championship, before even the halfway point of the season, meant Girolami didn’t chase up a further three points he could have scored by passing Coronel. Instead, his title rival outscored him by that amount.

“Tom had a really, really good pace so I can’t catch him up,” Girolami justified. “Okay I could 90% [catch him], but in this kind of track you lose a lot of aerodynamic behind other cars, so I repeat after the first lap the work, the job, was done. I put this in my head, and I tried to finish the race in this position.”

The Comtoyou squad will now be heading to Motorland Aragón in Spain for the next World Touring Car Cup round, with Coronel part of its line-up there too, before returning to TCR Europe action the week after with a first trip to the Norisring street circuit on July 1-3.

“It’s quite interesting to see [TCR Europe] on a street circuit,” said Girolami. “I have some experience of street circuits in Argentina, so for me it’s going to be nice. We will see with 40kg, because now we will have 40kg for pole position weight. So we will see.”