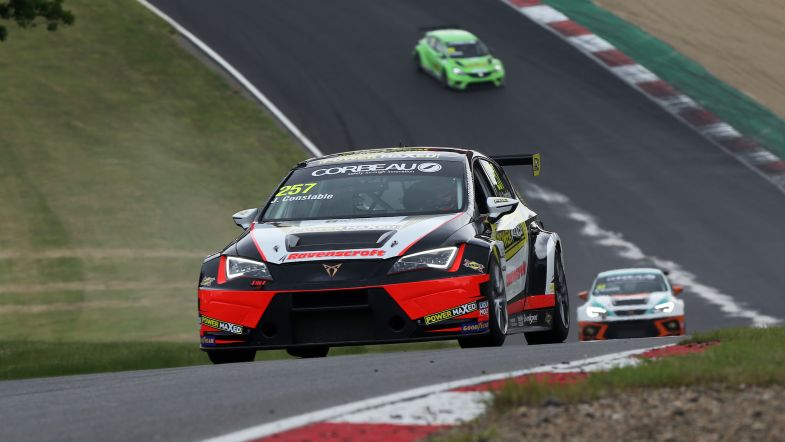 Jac Constable and Alex Ley shared the wins in the two Sunday races as the third meeting of the TCR UK Championship season drew to a close at Brands Hatch.

The reverse grid second race kicked off with Bradley Kent and Ant Whorton-Eales sharing the front row of the grid and it was Whorton-Eales who grabbed the early lead in the Subaru ahead of Constable – who had started on row two – also managing to get ahead of Kent into second spot.

Max Hart quickly also cleared Kent to move into third spot with the top three remaining the same through the early laps before Kent worked his way back into the podium spots.

Whorton-Eales was continuing to keep the pack at bay but was eventually overhauled by Kent, who had fought his way ahead of Constable, with the Subaru then gradually slipping back down towards the lower reaches of the top ten before retiring in the latter stages.

Kent and Constable would run together before the younger Kent brother then hit problems and was forced to pit, eventually rejoining three laps down and leaving Constable out front for a relatively comfortable first victory of the campaign.

Isaac Smith recovered from being shuffled back down the order in the early stages of the race to fight his way back through to second spot in his Volkswagen Golf, with the top three being rounded out by race one winner Lewis Kent as the defending champion picked up more silverware in the Hyundai Veloster.

A strong result from Brad Hutchison saw him grab his best result of the campaign to date in his Audi, with Hart and Callum Newsham rounding out the top six.

Hart had a lurid slide mid-way through the race that cost him ground, whilst Newsham survived early contact that left his Cupra somewhat battle scarred by the finish.

Darelle Wilson, Jamie Tonks, Russell Joyce and Andy Wilmot rounded out the top ten, with expected front-runners Chris Smiley and Adam Shepherd failing to make the finish as both retired early on. 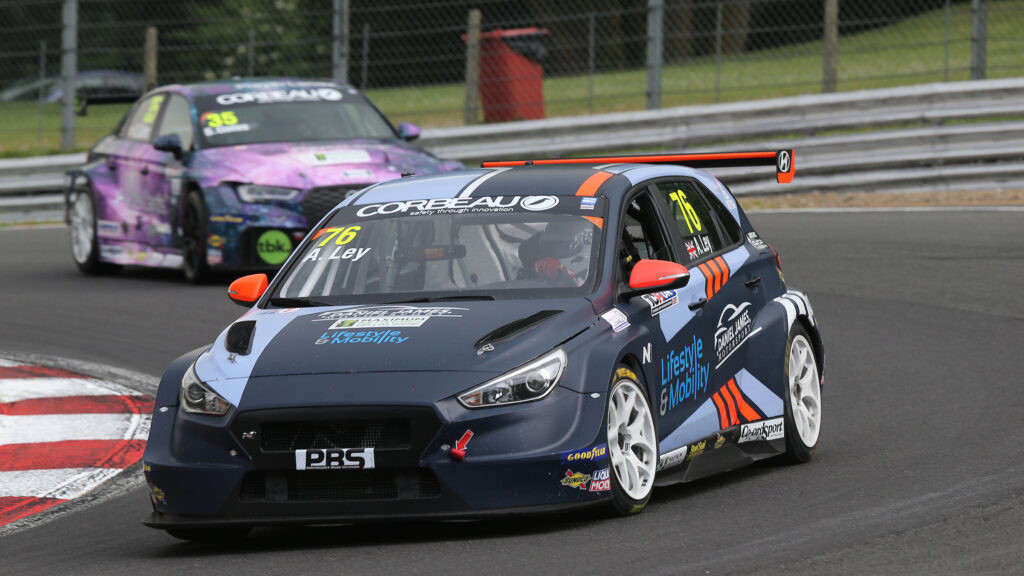 Ley started race three from pole and held the lead into turn one from Bradley and Lewis Kent, with Brad Hutchison rocketing off the line in his Audi to move into fourth spot having started in P6.

However, a clash involving Neil Trotter, Joyce and Steve Gales on the run to Paddock Hill Bend put all three cars out on the spot and saw the race red-flagged so the damaged machines could be removed from the circuit.

After a lengthy stoppage, the grid was reset for an 18 lap restart with Ley again leading the two Kent brothers on the run to turn one, with Shepherd moving up to fourth and briefly drawing alongside Lewis on the run to Druids.

On the exit of the corner, Newsham behind was tipped into a spin that dropped his Cupra to the back of the field.

As Ley led the field, race two winner Constable was in the wars and his race ended in the gravel at Clearways at the end of the second lap, with the safety car then being called out so the Power Maxed Racing car could be recovered from a dangerous position.

That left Ley leading the field round ahead of the two Kents, with Shepherd in fourth from Smith and Hutchison, who had been unable to repeat his demon start and was instead settled back in sixth.

The action resumed on lap nine with Bradley Kent taking a look at Ley into turn one as he was almost pushed by brother Lewis on the run up to Paddock Hill, with the only change in the top ten seeing Hart get ahead of Smiley for P7; Hart having started outside the top ten after a tough qualifying session on Saturday.

Ley quickly established a lead over Bradley Kent, with Lewis coming under pressure from Shepherd, and former MINI rivals Smith and Hutchison dicing over fifth as Hart tried to chase them down.

Shepherd managed to get ahead of Lewis Kent for third with a fine move around the outside through Druids on lap 14 that then gave him the inside line on the run down to Graham Hill Bend, whilst Hart dived down the inside of Hutchison a lap later to make his way up into sixth.

At the front, Ley was able to ease away to secure an impressive maiden win in the series, with a margin of more than five seconds over Shepherd – who found himself taking second spot when Bradley Kent was handed a track limits penalty that dropped him all the way down to 15th.

As a result, Lewis Kent took third spot ahead of Smith, Hart and Hutchison, with Bruce Winfield getting ahead of Smiley late on for seventh. Jack Depper and Wilmot then rounded out the top ten.