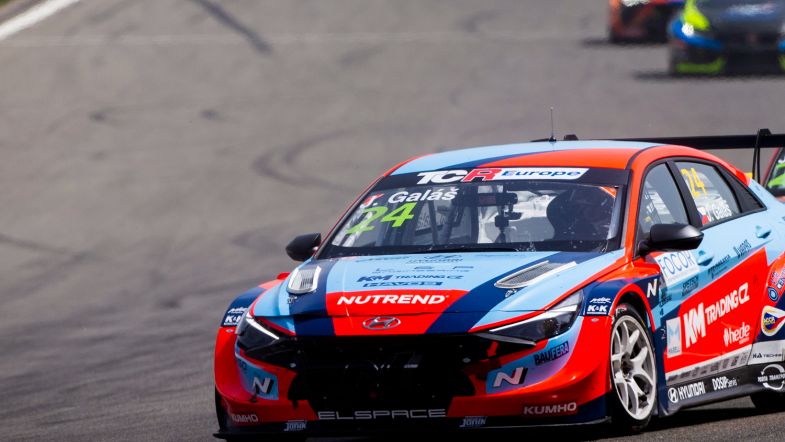 It was a one-two result for Janik Motorsport with its Hyundai Elantra Ns, as Mat’o Homola finished 1.918 seconds behind in second place after Comtoyou Racing’s Tom Coronel made a slow start from the front row in his Audi RS 3 LMS II.

Galás, whose best previous result in TCR Europe was a fifth place at the Nürburgring in his rookie season last year, had a strategy from the off and the 2019 TCR Eastern Europe runner-up pulled it off to expert effect as he tried to break the slipstream to Homola on most laps by moving side to side down the Kemmel Straight.

Homola had come under attack from Coronel after he lost second place, and he spent several laps pressuring him but never went for a risky move despite the pressure he was applying and finished in third. The result was still special for the Dutchman as his trophy was handed to him by his son, and it also meant he reduced team-mate Franco Girolami’s points lead.

Girolami started 10th but was already fighting for positions in the top six by the time the field reached Eau Rouge for the first time, and he then passed Jack Young and Josh Files in one go down the inside at Les Combes. He was fourth after that double move and that was where he would finish, with his mind on the championship battle for much of the race but also on Files behind.

On the last corner of the last lap he tried to make a move on Girolami, drawing alongside on exit and taking to the pitwall side of the track while Girolami drifted across to the left. They met the chequered flag in a photo finish, with Girolami just eight hundredths of a second ahead.

Callejas had the pace to get ahead, setting fastest lap at one point, and halfway through the race he did overtake Young at Les Combes very briefly and that ended up being his best chance of gaining a position.

Gavrilov and Jelmini’s fight was just as close and similarly ended in stalemate as no pass was made.

Brutal Fish Racing Team’s Pepe Oriola was a considerable distance behind their battle in 10th place, having spent his race battling with Diamond Trophy winner Evgeny Leonov and Target’s Nicola Baldan who had his rear-right wheel arch fold upwards on the opening lap and then flap about for the race’s duration.

There were three non-finishers in the race. Martin Ryba pulled into the pits after four laps and had a big off into the gravel exiting Les Combes on lap two, Viktor Davidovski had contact with Giacomo Ghermandi and stopped at La Source on the final lap, and Felipe Fernández crashed out exiting Stavelot later that lap.

Ghermandi ended up being the last placed finisher behind young Italian racer Marco Butti, whose debut weekend in TCR Europe was rounded out by an opening lap off and a race spent driving around on his own at the back.

TCR Europe will reach the halfway point of its 2022 season when it heads to Germany’s Norisring street circuit on July 1-3 for two more races.