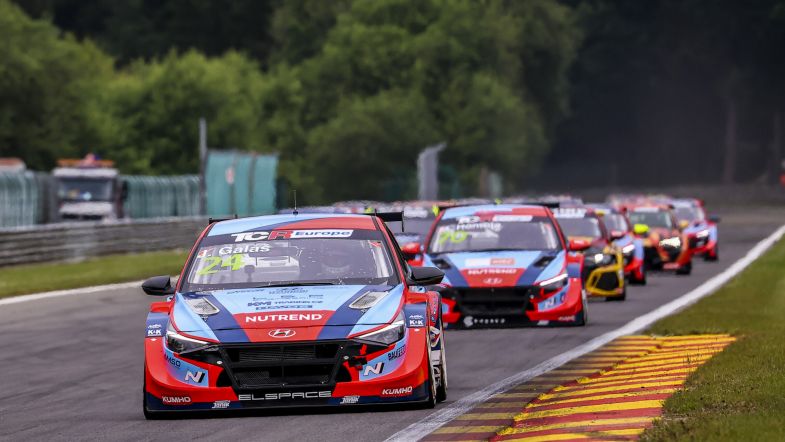 The Janik Motorsport team leaves the TCR Europe paddock at Spa-Francorchamps on a high after claiming a one-two finish with its pair of Hyundai Elantra Ns in race two of the weekend.

Jáchym Galáš led from lights-to-flag after qualifying tenth put him on pole for the reversed-grid second race, while Mat’o Homola passed Tom Coronel at the start to move from third to second.

For both Janik drivers it was their best result of the season, and the first time Galáš has finished higher than fifth in his TCR Europe career. It was also a big boost for the whole Janik team, which is in its second season in the series.

“We we can say that usually it starts to look like a tradition that we have a slow start to the season,” Janik’s team manager Tomáš Kováč said to TouringCarTimes.

“The same happened last year. And also we had podium last year at Spa, so we are really happy for the win. Of course we would like to be more consistent with our results as so far for example Mat’o did not finish four out of six races [in the points], which is not the way we want to race.

“We are doing our best to achieve the best possible results, and we really needed this win and this second place, and when it is combined in a one-two result we are really happy with that and we are looking forward to other races and hopefully we are just starting.”

Irrespective of the result, Kováč said that Janik’s cars had “behaved really flawlessly” with the set-up changes made ahead of race two and the drivers “had such beautiful pace from the start until the finish”.

“For Jachym, for sure this result is really a lot because it is his first win in TCR Europe. Mat’o knows this feeling. He had several podiums in the World Touring Car Cup [and TCR International Series], so we hope that this will boost both of the guys towards the right direction, and we needed this win and this podium.”

The Norisring street circuit debuts on the TCR Europe calendar next month and will be a new challenge for everyone. But Janik thinks it may have a bit of experience elsewhere that could help its performance.

“Well our team is also a hillclimb racing team so we know narrow places! One of our drivers has done many street circuits, the other not that much. So they will have to learn, and they will have to really focus, but we feel quite good before this Norisring weekend.”