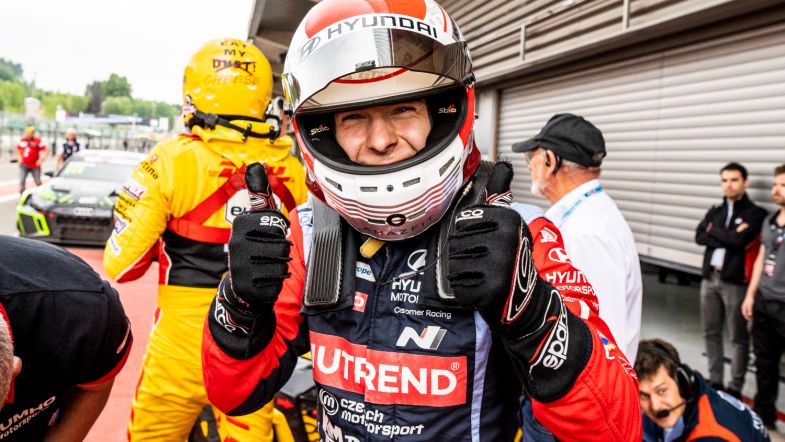 New TCR Europe winner Galáš: “If we could do it once, how hard can it be to do it again?”

Jáchym Galáš claimed a breakthrough maiden TCR Europe win in the second race at Spa-Francorchamps, and revealed to TouringCarTimes how he executed a pre-race plan.

The Janik Motorsport driver had a best finish of fifth last year, one of only two top-10 results in his rookie season, but he has shown improved form in 2022. He qualified tenyh at Spa, turning that into a ninth place in Saturday’s race, then from reversed grid pole won Sunday’s encounter.

It was a controlled lights-to-flag performance by the 2019 TCR Eastern Europe runner-up, and lifts him to ninth in the championship standings as the season approaches its halfway point.

“I’m really super happy for the victory because Spa is a legendary track and for it to be the first victory it makes it all the more special,” he told TouringCarTimes following his win.

“The race itself was I would say pretty controlled from my side. I mean the crucial point was the start. I had a really good start from 0-100kph, and I managed to get some space even before the first corner where I could prepare the exit and I managed to keep that margin through Eau Rouge until the end of the Kemmel Straight. There was like one second, and that was enough.”

On several laps, Galáš moved left and right while going down the Kemmel Straight in an attempt to break the tow, and it proved a successful strategy. When asked if it was his pre-race plan to make those moves, he said: “Yeah, especially because I’m leading. Everybody else behind you had slipstream and you’re the only one who doesn’t. I did everything I could to at least level the field.”

Tyre management was also critical through the weekend’s action, with Sunday’s race running without a safety car meaning the onus to keep tyres cool was on the drivers.

“I knew, or at least I counted with the situation that it might happen that they could catch up on me, thinking about the slipstream,” Galáš said on how much he had been preserving his rubber. “But still, I think I managed the tyres very well and in the later stages of the race I managed to pull out even more.”

As for following up on his first victory at a continental level, he added: “I certainly hope so. If we could do it once, how hard can it be to do it again, eh?”

The next TCR Europe round takes place on the Norisring street circuit on July 1-3.